With The Video Crew

Downstairs at ZURB headquarters the video team of fellow ZURBians Arthur, Roland, Jordan and volunteer Jason have just returned from a road trip out to Rebuilding Together Peninsula's warehouse. With camera in hand their mission was to create a story through film. They shot key backgrounds to give the video a sense of place. They also went to a few building sites to conduct interviews with clients of the non-profit.

Project lead Roland mapped out the plan with an outline and a storyboard using our famous design sketches. They broke the video down to three segments: history, stories and the future. 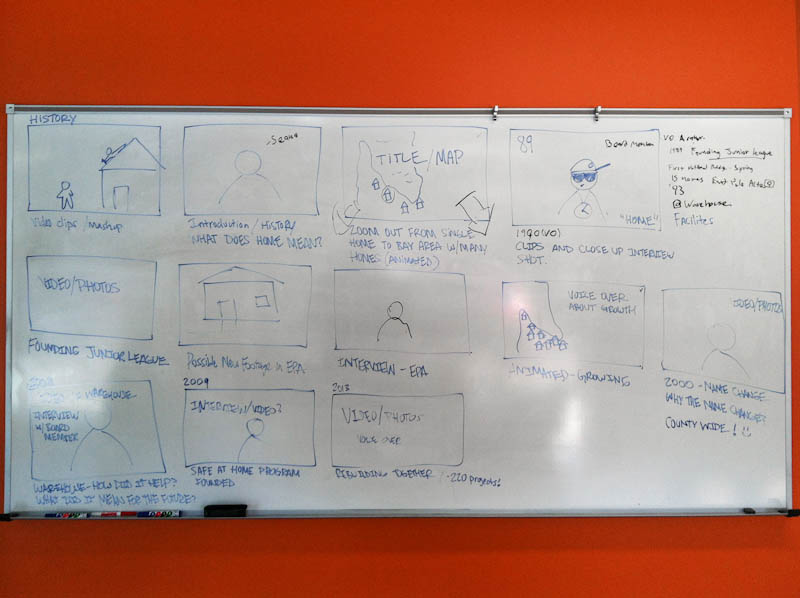 ZURBian Arthur created a structure for the interviews before they left on their road trip. Meanwhile a few stayed behind to review videos from the 90s of news stories, board of director interviews, and footage of volunteers hard at work with our community. The team is hard at work capturing the story of Rebuilding Together Peninsula — we’re still filming, even as we post!

Between 7pm to 2am the team plans to be deep into post-production. They'll turn their footage from today, the videos from years past, and interviews into one solid piece of film that conveys all of what Rebuilding Together Peninsula is.

Before dawn the film crew will have produced, directed, edited, and scored a film in 24 hours. Take that Quentin Tarantino! We just made a film for Rebuilding Together Peninsula's big gala event to celebrate 25 years.