No media query is an island unto itself. Several often work together to create the appropriate styles for different scenarios — smartphones, tablets and desktop browsers, and even different screen orientations. You have to worry about conflicting ranges. You have to write redundant code. You have to hunt for queries through dozens or hundreds of lines in CSS. Overall, media queries in complex products can be a pain.

But they don't have to be. Sass makes media queries a snap with very little setup. Here's how you can use Sass variables to master media queries.

A range is the space between breakpoints — while a breakpoint might be 10em, for example, 10–20em defines everything between 10 and 20. In this case, our ranges look like this:

We prevent overlaps at each breakpoint by adding 0.063 — approximately one pixel when the default font size is 16pt — to each minimum width.

Above: Overlaps occur when two ranges, like 0–40 and 40–80, have a pixel of overlap. At that point, browsers don't know which set of rules to apply. When we make one just slightly different — in this case adding 0.063em — ranges become unambiguous.

The next step sets up ranges to become media queries.

Notice that this isn't CSS yet — browsers don't read SCSS itself. We're just setting up the code for the queries themselves, which we define next:

When compiled you'll get:

4. Adjust on the fly

Let's say we decide that 0–40em isn't right. Maybe we want, say, 0–42em instead. Using the first variables we defined, you can change both the small range (0–40em) and bump up the medium range to accommodate the change.

This one change will result these media queries:

Actually, when we think mobile-first, the first media query is redundant — all styles should apply except for medium and large screens. But the small query is helpful for debugging.

Let's apply this to a real site. Pure Fix Bikes has several breakpoints that we could use Foundation's medium- and large-block grids to create. 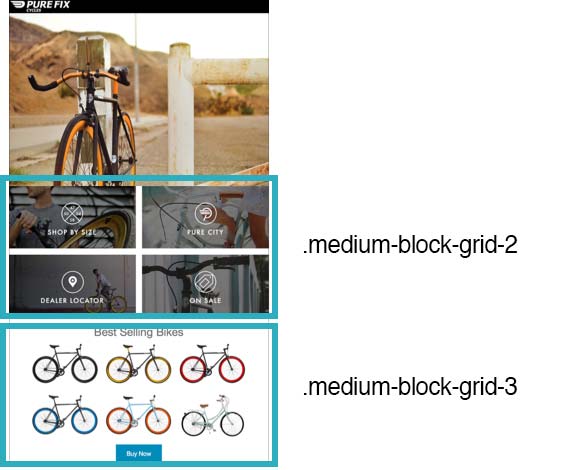 Above: We could use the medium block grid to arrange images in two different rows. 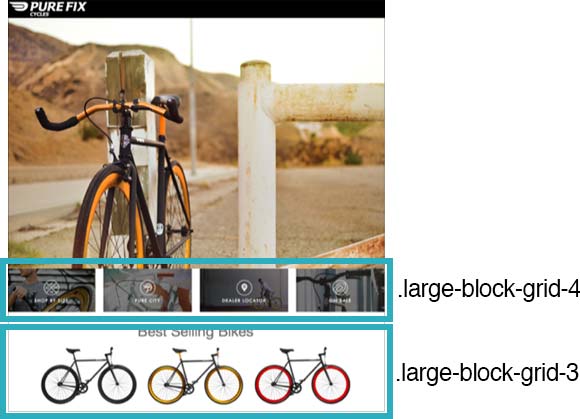 Above: Meanwhile the large block grid creates a different layout arrangement, which adds even more non-semantic code to the page.

To make this semantic, we start by creating two sets of elements:

Into that we add Foundation's block grid:

These includes will create a single-block-wide layout, which works well on mobile devices. Next we add Foundation's built-in $medium-up media query to override that in medium-sized screens:

Finally, we add a media query to push the menu to four items in large viewports. (Remember that the item-list remains three blocks wide.)

And that's it. The more complicated a product's CSS becomes, the more important variables are. This technique keeps you from digging through hundreds of lines to keep track of media queries' ranges, especially when you organize your SCSS into parts that use the same query values repeatedly.