Steering You Right with Panini’s Handlebars Helpers and Data

An intro to Panini’s Handlebars helpers and using Data for repeatable content.

There comes a time in your life where you no longer accept wasting time on tedious tasks. Some of us are masters of efficiency, writing scripts to automate tasks. Some of us find tools to do it for us. At ZURB, we use Panini to save time, deliver organized code, and repeat ourselves less. Using Data and Handlebars Helpers in Panini go a long way to setting us up for success and we’ll show you how. Last week we covered using Panini’s front matter and variables. This week we’ll build on that by learning about using Panini’s Handlebars’ helpers and data. Let’s get started!

There’s a lot of really cool stuff here, so this lesson is an intro to Panini’s helpers and data. Next week we’ll put all we’ve learned about Panini together and show some advanced examples.

With a Little Help from My Friends

In Handlebars, helpers can be used to bring logic into your pages, so you can do things like dictate what conditions your content is displayed in or iterate through lists of data. Handlebars ships with some built-in helpers, such as {{#each}}, {{#if}} and {{#unless}}, and Panini adds a few more. Here is how helpers work:

Let’s take a look at all the helpers built into Panini:

The if helper is native to Handlebars and allows you to create a condition statement. You can choose whether a particular code is included or not depending on a boolean value. For example, we can conditionally add or exclude a hero unit like so:

A helper uses the Handlebars curly brackets along with a #

The if helper needs an identifier to know what it refers to. In this case we’ll use a variable called hero. Then in the front matter of a page, we can define the conditional to show or hide the component:

We can set this to true or false. If you leave it out, Panini will assume it’s a false and not include the component.

The ifpage helper is a custom Panini helper that allows you to create a conditional based on the pages you’d like the component to be included on. You use it like this:

Notice that you do not need the file extension of the page (.html) or any file paths. Panini will find the pages. Using this helper, you can chain together multiple pages like so:

The ifpage helper is useful if you have very few pages that you’d like the HTML to be included into. If you’d like the component to be on most of the pages but restrict it from a few, then the unlesspage helper would be better.

You can include HTML with the unlesspage helper and choose what pages you’d like to exclude like this:

So in this example, hero will show on all pages except index, about, and contact.

Ifequal is another Panini specific helper that allows you to compare two values. Since Panini is aware of the layouts you are using, you can use the layout helper along with ifequal to include HTML based on the layout it will end up in. For example, The Foundation site has one footer partial but four different sets of links, descriptions, and colors.

Instead of making four footer partials to maintain, we can use one with the ifequal helper.

This is handy because now we only have to maintain one footer and it can be different for each microsite’s layout. You can use ifequal with any built in variable like page and layout or any custom variable. There’s many more use cases for the ifequal helper that we’ll show in the next lesson.

Sometimes when you’re scaffolding your project, you may not have real content to work with or you just need to get something coded fast. In order to save time and avoid pasting repeated content multiple times, Panini has a handy repeat helper. Let’s say we’re building a gallery of 12 cards. We can wrap our repeated element in the repeat helper to have it iterate as many times as we need.

The repeat helper is a real time saver. You would likely remove it when you have real content to add or if you are using data. With data there is a similar helpd called the each helper.

We can use{{#each}} much like the repeat helper but along with data. The each helper will iterate through a component and print out the HTML for each object in our data. It looks like this:

This will repeat the <li> and HTML within as many times as there is available data in the {{link}} and {{text}} variables. We’ll take a look at how data plays into this below.

{{#code}} will format a chunk of code using Highlight.js, which can then be styled using a CSS theme. 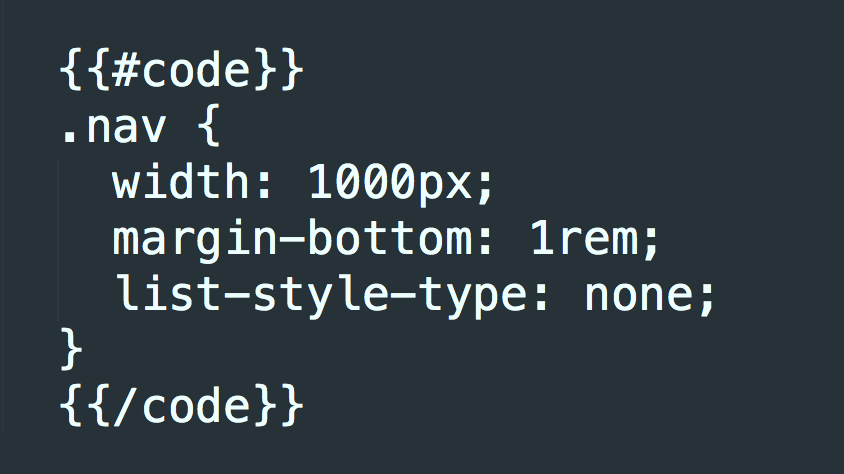 {{#markdown}} will convert Markdown into HTML.

We’re really excited about what you’ve learned so far in this series on Panini! In the next lesson, we’ll put it all together and show you some more real-world use cases and advanced examples of using all of our Panini power to pimp our projects. To learn more about Panini, the ZURB Stack, along with advanced Sass, and JS check out our Advanced Foundation online course which takes place on March 21st. You’ll learn tons of tips and tricks directly from the Foundation development team.