Shuffling Columns in Foundation Without Changing its HTML

Learn how to rearrange elements in a Foundation row without changing HTML. Much.

For years, the order in which an HTML document was written directly impacted how it was displayed. Want navigation on the top or left? It had to come before content in HTML. That was an uncomfortable — but necessary — restriction in the past. But with the rise of mobile devices, and some new CSS techniques, designers need greater finesse over their work than restricting “top-left” to always meaning “first.” 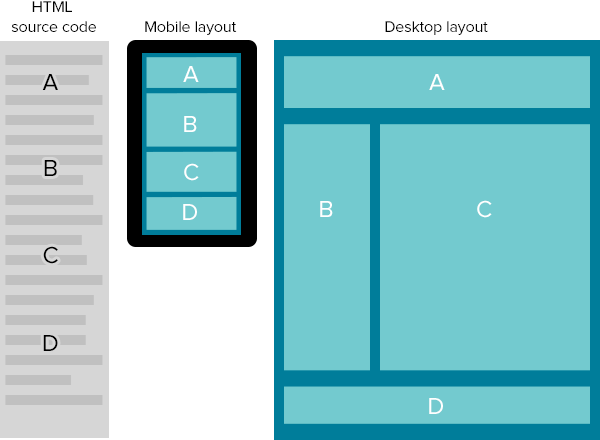 Luckily, the future looks bright for layout options. Among others, our responsive framework comes with the ability to arrange columns regardless of how they’re set in HTML. Here’s how you can rearrange elements in a row with Foundation.

In this example, we’ll start with blocks “A”, “B” and “C” in order. This puts the most important information higher in the HTML, and left on the page.

But that’s restrictive. Let’s say we want the main content on the right.


The class .push-6 moves A six columns to the left.

Obviously, pushing one wide column to the left obscures the two thin ones.

The .pull-# classes to the opposite of .push-# — moving blocks to the left. Here we pull the two narrow columns to the left.

As we saw earlier, it’s possible to overlap columns. Thinking further, it’s even possible to push/pull columns out of rows altogether. That’s where math comes in to play:

Creative designers may find an occasion to push/pull columns outside of their row, but in general we recommend using source order a tool separate content from presentation.