The End of the Black Turtleneck

I was mingling with a few guests at a small wedding some years ago. It was a slightly overcast day in the California mountains, but the venue had beautiful views that overlooked the entire San Francisco Bay Area. Quite stunning. The guests were arriving and casually streaming into the reception area when I happened to catch a glimpse of a pair of gray New Balance sneakers. My first thought was, 'Who wears sneakers to a wedding!?!' To top it off, this guy was wearing blue jeans, and not the slim stylish kind either. Dad jeans.

As I grabbed my own uncomfortable neckline, I became slightly annoyed that this guest had considered a jacket and coat optional. In Silicon Valley, casual is the norm, but this gentleman had taken it to another level at a wedding. And then it hit me as I stared at this gaunt man with his frameless glasses and black mock turtleneck. This was Steve Jobs. 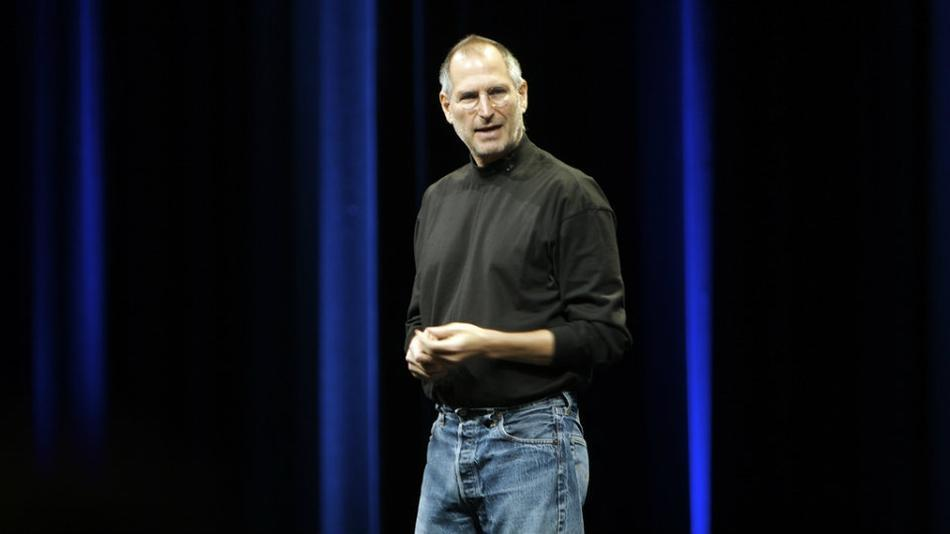 After getting over the absurdity of his wedding outfit, I couldn't help but reflect on the pure dedication and commitment to the idea of a corporate uniform. Only this was not just a work uniform, it was a life uniform. I continued to struggle hopelessly through conversations, overwhelmed with my amazement that he remained in character at a wedding. I've heard many an artist and musician creating a stage persona, but this just seemed outrageous.

Steve was considered a design messiah by many and here he was next to me mingling with guests in his Apple uniform, the one synonymous with each of their product launch events. He represented not only excellence in design, but the excitement and delight that every new designer hoped to one day accomplish: A stunning reveal to a group of people who gushed over their design. He was our Michael Jordan, our Jack Nicklaus. Steve showed the world that design did matter. That it was important. And that it could make amazing things happen in a company.

With the advent of desktop computing and publishing in the 80's, designers had a new creative tool to express themselves. Steve made this happen. Steve was a manifestation of this expression, quite literally. He created a revolution with each new computer product he revealed. He had the public not only hanging on the edge of their seats, but an entire industry of designers following each new trend that Steve revealed. His uniform represented not only a maniacal focus for creating amazing products, but also a magical, almost larger than life, creative output that designers emulated in their own companies. 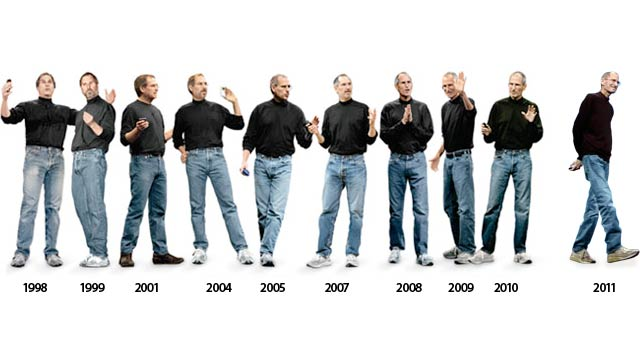 A Standard for Creativity

But why black turtlenecks and Levi's jeans? Now I'm not an expert in fashion, but given Steve's early love for typography and creative thinking, I'm guessing his affinity for design had him hanging around the corporate misfits that wore a lot of black. The black sheep of this post 'Mad Men' era were designers who set themselves apart from the stodgy, corner office thinker. Steve loved breaking down the status quo, and I'm sure these creative types represented this spurring of business as usual. A visual search for creative director still captures our affinity for black.

The mock turtle necks have their roots in one of Steve's trips to Japan in the 1980s. While touring Sony, he was surprised to see everyone wearing a uniform, a nylon jacket/vest combo designed by fashion icon Issey Miyake. Sony's chairman, Akio Morita, told Steve that the uniform helped bond the works to the each other and the company. Steve immediately fell in love with the idea and sought out Miyake to design a similar outfit for Apple employees. He came back enthused and with dozens of samples but was ultimately met with a near unanimous 'no way.' The idea for a uniformed Apple workforce died then and there, but Jobs was still passionate about adopting the idea for himself. He recruited Miyake to make hundreds of mock turtlenecks for himself as a kind of life uniform, a look that has become synonymous with the name Steve Jobs.

In Steve's distorted view of reality, I'm sure the uniforms not only represented a sense of unity and purpose, but a commitment from every employee to do their best work everyday. He understood that highly focused individuals and committed employees were required to pull off the Apple products he imagined. And I bet he saw the uniform as a way reduce the overhead of choice, enabling employees to focus on creative endeavors that made a far greater impact on the world.

Steve never took the path of least resistance. He never accepted the world 'as is.' He did everything with intentionality. No detail was too small to escape his attention. He also pushed us beyond what we thought we could do'we experienced his 'reality distortion field' firsthand. He just kept raising the bar, even when it seemed unreasonable. But we would try, and we would get three-quarters of the way there, which was always farther than we would have gotten by ourselves.

We Got It Wrong

I wasn't an Apple fanboy, but I admit I was blinded by the excitement surrounding Steve's big reveals. I don't recall ever being in our ZURB office without somebody streaming an Apple reveal over the last decade. As designers, we came to associate Steve's attire as a symbol of excitement, big reveals, screwing the man, and showing our coworkers that design was what the world needed. Steve was our shield. We could point to him. He embodied all our struggles and wants. He made magic happen in a boring, beige computer industry.

What we didn't know is that we were creating a pressure cooker. Designer's took all the wrong ideas away from his presentations. Big reveals were marketing techniques, not methods to surprise our internal product teams. Sexy interfaces were inspirational, not things we blindly copy without consideration for users. Going against the grain was a way to inspire people, not an excuse to shun the ideas of our coworkers . Secrecy was a business technique, not a reason for us to hide and design solo in our computers. Spurring focus groups encouraged risk taking, not give us a reason to avoid learning from our customers.

Modern designers pour over every detail of Steve's life, hoping to piece together clues that they can mimic and unlock his magic with. What they fail to realize, is that Steve's focus wasn't about helping people elevate design in their organizations. The recipe for organizational transformation is not going to be found in those Apple Keynotes or in the Aaron Sorkin bio pic. Steve transformed the way we think about design in organizations, but he did little to reveal or shape how designer's were suppose to make it happen.

Creativity is just connecting things. When you ask creative people how they did something, they feel a little guilty because they didn't really do it, they just saw something. It seemed obvious to them after a while. That's because they were able to connect experiences they've had and synthesize new things. And the reason they were able to do that was that they've had more experiences or they have thought more about their experiences than other people.

Unfortunately, that's too rare a commodity. A lot of people in our industry haven't had very diverse experiences. So they don't have enough dots to connect, and they end up with very linear solutions without a broad perspective on the problem. The broader one's understanding of the human experience, the better design we will have.

He was in no rush to pull back the curtain and show people how the Apple sausage was really made. His focus was in designing amazing products, amazing products only Apple could come up with. It was entirely in his best interests to keep people thinking design is a mystical and mysterious craft that only a blessed few understand and can harness. All of his eccentricities and idiosyncrasies are false flags that distract people from seeing the real, messy way design actually happens. He was able to keep that all tucked away out of view for years. We never saw the Jobs that was going through hundreds of revisions, going down hundreds of wrong paths, making incremental gains. We just saw the neat black turtleneck and the unveiling of the shiny new piece of magic.

The most memorable big reveal was arguably the 1998 release of the iMac. It was a game changing product, and it was delivered in less than ten months of Steve's return as interim CEO. It kicked off Apple's turnaround and emboldened Steve to push harder into breaking down standards. After this his attire changed to his corporate uniform.

In a sea of sterile beige and white, Jobs revealed these colorful half orbs from out of thin air. Beyond their lickable colors, they forever shook things up in other ways. They relied solely on USB, they promised connection to the internet in only 2 steps, and it killed the floppy drive. It was the perfect, textbook example of the big reveal, and was repeated again with the iPod, the iPhone, and the iPad.

But the effectiveness of this technique has diminished over the last 5 years. Device specs, screenshots, and photos are leaked months before the events. Instead of catching us by surprise, we're merely given confirmation of what we already knew. Even Steve had a hard time keeping the curtain closed towards the end. Despite all of their capabilities and resources, Apple is not able to hold on to the secrecy necessary to keep the big reveal working. The era of secrecy and isolation has come to a close, killed by the internet and social media, and yes that's a good thing.

There are still millions of creatives that confuse this marketing technique with the collaborative effort it takes to make real ideas happen. But now the truth can come out, the truth about product design, Apple and even Steve. The truth is that Apple has a highly iterative design process and always did. The truth is that Steve Jobs was actually an amazing collaborator, sometimes working with multiple design teams and agencies to refine a feature and work through an idea. The mysticism was just for show.

It's time for designers to embrace what really drives amazing products and innovation, connection with other people. The impactful design leader is not a lone genius that locks themselves away only to come back with magic that even they themselves don't fully understand. That's myth, storytelling. No, the impactful design leader is a facilitator. They bring people together from all parts of their organization, rally them around ideas, and extract the best thinking into small gains that lead to big wins. They are found with people, soliciting feedback from designer and non designer alike. They realize failure is both an inevitable and necessary part of the process. They understand it takes constant iteration and a volume of ideas to get to the right answers. And they don't have to wear a black turtleneck.