The engineering team at ZURB has had their heads buried in code since the morning. So when asked for a comment, things can get a little interesting. Jordan, Engineer at ZURB, responded, "Hopefully, there are protractors in the backpacks," referring to Family Giving Tree's mission to hand out supply-filled backpacks to children who need it the most.

Jordan is responsible for putting together Family Giving Tree's online donation platform, Virtual Give Tree. Come heck or high water, or the sun coming up first, he's committed to finishing the project on time. Currently, Jordan is integrating the Virtual Giving Tree into the established design scaffolding that our design team put together.

The Virtual Giving Tree will be used by all of Family Giving Tree's registered companies and friends to gather donations. While any amount of money can be donated, you can provide a complete backpack full of goodies for just $30.00 or a buy supplies for $15.00.

Jordan explained that his biggest challenge has been re-acclimating himself to using PHP. That's because ZURB primarily runs its stuff through Ruby on Rails.

Other engineers are also hard at work. Matt, Partner and Product Lead at ZURB, has been integrating Google Maps into Family Giving Tree's new site. This will make it easier for people to find the donation sites closest to them. 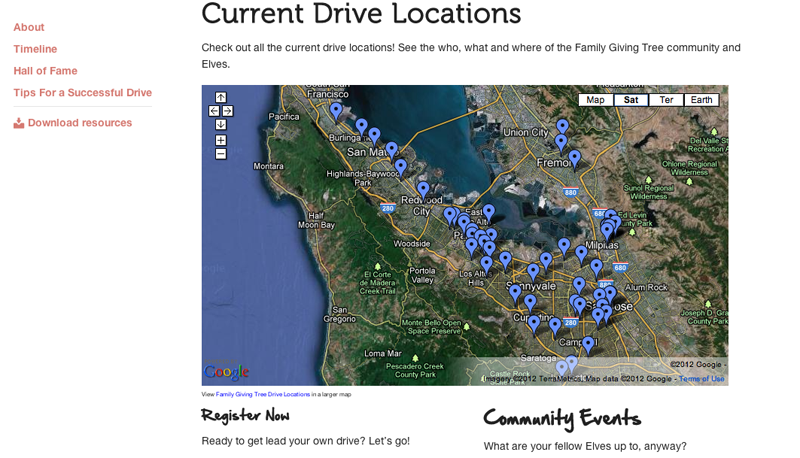 While talking with Matt, the idea of the map expanded and will now be featured on a few more areas of the website. This will replace the old bulleted list of locations that was on the site.

Mark, Engineer at ZURB, is also hard at work automating the deployment process. He's double checking the CSS and also spending down time helping our Design Team with JavaScript.

Mark explained his biggest challenge has been writing a custom solution for automation with PHP. He explained that he is used to using Ruby on Rails, which comes with several built in helpers, and he is trying to implement in the PHP automation.

Our Engineering team is extremely excited about their work! Let's cheer 'em on during the final stretch!