What If ... Leonardo Da Vinci Was a Silicon Valley Entrepreneur?

Oh, we're suckers for "What If" tales, like the ones found in comic books. What if Batman married Catwoman? What if Superman was a Soviet dictator not an American hero? So when we came across Brian Sullivan's UX magazine article on the sketching secrets of Leonardo da Vinci, we couldn't help but ask — what if Leonardo ran a tech start-up?

Frankly, Leonardo would kick butt as an entrepreneur. After all, Leonardo was a true renaissance man, a painter and sculptor who had an inventor's mind. Leonardo had that entrepreneurial spark. Get this, he dreamed up the helicopter, tank, and, even, the airplane long before they were actually built and used.

Picture it for a sec. Of all his skills, what would Leonardo have brought to Silicon Valley? What would've made him a success? Well, we think he'd be up for the challenge, and here's a few skills we think he'd employ. 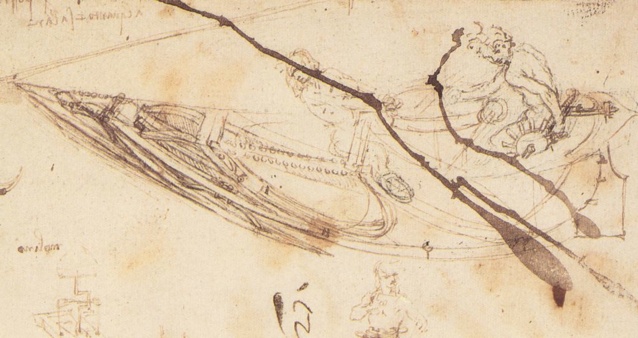 Leonardo was a scrappy artist, as Sullivan points out, scribbling some 13,000 drawings with tons of annotations (take a look at a few here). He sketched everything and anything — from mechanical marvels to flowers blossoming to the human anatomy. Leonardo worked out his ideas and problems on scraps of paper.

Take Leonardo's famous "The Last Supper" painting. As he was working through that painting, Leonardo did a sketch of the musculature of the arms and shoulders so he could see how the arms should look in the painting, says Sullivan. That's a time-tested design technique right there. Leonardo knew that sketching can help test out ideas and eliminate ones that don't work.

He'd Get A Drawing Partner

Leonardo didn't shy away from collaboration. He valued feedback. While doing anatomy sketches, he worked with an anatomist to get the details right, says Sullivan. By nature, sketching is collaborative and social. That's because sketches are disposable so there isn't a lot of ego invested in them, making it much more inviting for people to work together. Leonardo would've rocked this approach today, building a team whose skills would ensure that the details were just right.

Not One, But Multiple Iterations 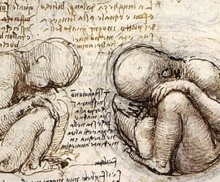 Leonardo's multiple sketches of a fetus in the womb.

Leonardo wasn't satisfied with doing just one sketch of something. He did multiple iterations, drawing and redrawing an object from different perspectives and stages of development, says Sullivan. As part of our design process, we've found that multiple iterations make it easier to ask some dumb questions that can sometimes lead to great answers. Leonardo came to the same conclusion, which is why he continually refined his ideas through a lot of intentional trial by error. Believe it or not, it's also not too different from the approach taken by well-known investors Dave McClure and Ron Conway.

Ron told us at his soapbox talk that his firm doesn't always know who'll be a breakout company, but talks to dozens of them, asking tons of questions before deciding to sink money into a company. Whereas Dave McClure said at his soapbox talk that 500startups isn't always sure in the early stages of investing, saying the fundamental philosophy at his firm is that "we're not that smart." In other words, both men don't know the right answer going in, so they try a lot. That's something Leonardo would easily get behind.

Could Leonardo Prevent a Flop?

Let's take this "What if ' " a step further. Say Leonardo was pulling the strings on Google's flop ''Wave. Would he have concluded sooner that it wasn't building momentum? Would he have noticed sooner that users were confused by its complicated interface? How would he have designed it? Da Vinci may have even arrived at Google+ a lot sooner than Googlers did. Makes us wonder, what other flops would have turned out differently had Leonardo been at the helm?