That One's Yours, This One's Mine!

In the course of working on a new mobile site for one of ZURB's clients an interesting point arose. On the original non-mobile site, areas on the site specific to the user were referred to as 'your stuff' or 'your albums' whereas on the mobile site we unconsciously changed them to 'my stuff' and 'my albums.' This brought up an odd notion: who exactly is speaking in these cases? 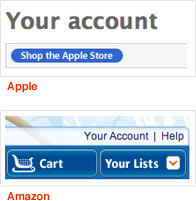 In cases like "your stuff" the site is speaking to you. "Here is your stuff. Here are things you can do." A lot of sites use this style including some notables like Amazon, Apple and 37Signals' tools. They refer to "your cart" or "your account", "your page" – suggesting that the site is the one speaking to you, saying what they have available for you.

In contrast a few sites go the other direction – Lighthouse, LinkedIn (partially) and Google Analytics. I was surprised to find so few examples of this style as my gut feeling was that it would be more common, not less.

There are quite a few sites that don't settle on one but switch between both. Google, as is generally the case, lacks consistency here – Gmail alone manages to refer to "my chat history" on the same page as "your AIM account." LinkedIn seems to try and stick with "my" but quixotically mentions "people you may know." 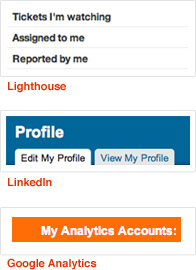 So which is it?

In many cases the language a site uses is unconsciously selected by the designer. If as a designer I'm creating a site based on my imagined use of it, I'm more likely to say things like "my pictures" or "my account." I picture myself using it and thus expect it to be an extension of me, of my content, rather than a tool that speaks to me as a user. If on the other hand I work on the language from a more detached perspective, not envisioning myself using it, I'm more likely to think of the users as a separate entity, one to which I don't belong. Hence the use of "your account" or "your stuff."