Say Hello to Our Newest ZURBian

Yesterday, Bryan gave us all a sneak peek into our soon-to-be new home. He highlighted that one of the reasons that we needed the new space was because we were running out of room at our current location. And boy, the new space couldn't come at a better time as we've officially added another ZURBian to our crew.

Well, he's actually not that new. He's been with ZURB for awhile as a contractor, but now we get to bring him on as a full-fledged ZURBian, which we are super excited about. So without further ado, let us introduce you to Arthur, our newest front-end engineer.

Growing up on the streets of San Jose, Arthur was always outside riding bikes, skateboards and riding around on public transportation. Oh, and a like a lot of us at ZURB, he was really into gaming. He even had a good run as a competitive gamer. First-person shooters and "Gears of War" is his forte. 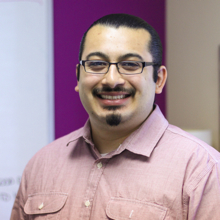 But Arthur always dabbled in code, helping his friends do everything from making free websites to customizing profiles on social media sites. Eventually, Arthur thought this might actually make a good career. While getting schooled in the South Bay Area, Arthur stumbled across ZURB. At the time, he was looking for an image slider for a class project. But he heard the angels sing and realized that ZURB was less than 15 miles down the street from him. He took the plunge and applied for an internship, which he says was a great decision. That internship turned into a contractor position, which then turned into a permanent position!

Since starting here at ZURB in August of 2011, I have learned so much from Design Thinking, timeboxing projects, to producing better more efficient code. I now code and develop these pages getting through problems faster.

When Arthur is plugging away at ZURB, he enjoys Djing, drawing letters, taking photos, watching "The Office," and getting out of the city to enjoy the views. And, of course, spending time with his family and friends.

Everyone please give Arthur a big warm welcome!