Around the ZURB office, we have a little game we play: someone says he is going to do something, and we reply with "You would." For instance, Ryan might say, "Going to Quiznos for a salad" and I would reply, "You would." The latest craze has been about finding a comeback, and boy have we found one: "I know, but still."

Look out, those ZURB guys are crazy, right? Maybe, but let those little quips sink in for a moment. Good, now for the best part: we're not the only ones playing this little game. Microsoft just picked it up with Apple with their latest marketing initiative: "I'm a PC, and I've been made into a stereotype."

Some of you may have heard Microsoft is ditching Seinfeld in favor of a new set of advertisements meant to directly target Apple's "I'm a Mac" ads. Too bad Microsoft is just playing the "me too" game and solidifying the fact that they are out of touch with customers as a brand.

Apple has been really leaning into Microsoft lately, especially over Vista's performance issues, working its magic to convert PC users to Macs. And now Microsoft, desperate to regain its image, is trying to ride on the "Get a Mac" ads' success.

If Apple & Microsoft Were to Talk...

To do it, they've concocted their own PC character to do battle with Apple's own. Below is a side-by-side comparison. We'd advocate that the Apple PC character is a more approachable, better looking character. Maybe it's just the lighting... or maybe Microsoft doesn't even know itself. 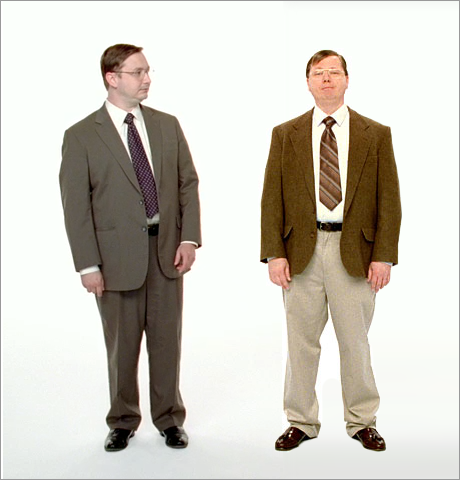 Microsoft PC: "I know, but still."

Really, it isn't that great of a conversation. It proves nothing and forces Microsoft to remain as the antagonist, even in their own campaign. Microsoft is acknowledging that they are not just out of sync and that now they need to respond to Apple's commercials, years after they came onto the scene.

In a Wile E. Coyote and Roadrunner fashion, Apple's ads are satisfactory and really entertaining. Unless Microsoft can really pull this off, they are still going to be as uncool and out of sync as they were with Seinfeld.

Can they do it? We don't think so.