How to Use Images When You're Designing Without Pixels

In the past few weeks we've been talking about designing without pixels - moving past a fixed-width, single device canvas into...not the future, the present, where different devices and resolutions are everywhere.

Today we'll start getting into the nuts and bolts of designing sites and applications where pixels aren't the primary concern. This may sound unintuitive...after all, images are just pixels. We'll take a look at why that doesn't really matter (and what to do when it does).

When to Use Images

When you're dealing with a responsive design you have to be more careful about when and how you use images. There are a few things to consider:

Let's talk about that last one for a second. If you use a grid system (and we suggest that you do) for a fluid, responsive design you'll be dealing with columns with percentage widths. In any case where you use less than the entire row (breaking the page up into horizontal columns) your columns will have an odd and sometimes uneven pixel width.

This is a rounding issue, and it's well documented (you can check out this Quora thread for some discussion on it). Simply put, browsers handle displaying subpixels differently. 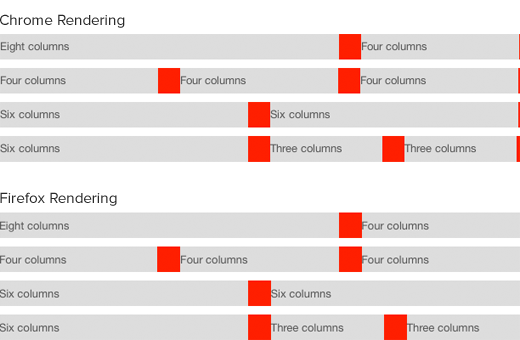 Notice the way Chrome and Firefox handle grids. The red shows the background of a row, so you can see how Chrome's rows don't end evenly.

You might look at a percent based grid and see that in Firefox your careful calculations mean the row is the right width every time, and you'll think 'well, Firefox is obviously the correct one.' Not so fast: now your columns won't be the same size. Is it better to have two equally defined columns be the same actual size, or to have them add up neatly to a row? Good question. Using percentages is tricky, and there's a lot of edge cases and strangeness that return us to this point: you likely won't know what size images you place really are.

Now that we got that out of the way, let's talk about the simplest thing to do with images in a pixel-less design. Setting your images to 100% width means that they'll expand to fill the size (and corresponding height) of whatever element you place them in. This is ideal if you're using a grid system - you can use the grid to set your image widths, and that will make sure they stay the right size no matter what size the screen is. 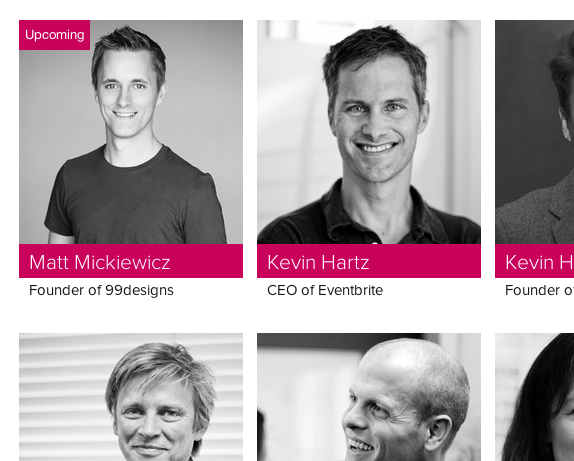 Each of these images are 100% width, controlled by the grid

Check out this example, a site for ZURBsoapbox, a speaker series we host here at ZURB. We wanted a site that showed the full roster (and past podcasts and talks) of everyone who has spoken, as well as who was coming up, and we wanted it to have a mobile component as well.

Try scaling it down - you'll notice that the grid shrinks, and shrinks the grid of images below in turn. The image on top however is cropped, because it's a background image: its size won't be affected. By using a grid we don't have to do anything to make these images behave, they act as intended without any manipulation on our part.

There are some pitfalls to handling images in a responsive design on the front end alone. The images on ZURBsoapbox aren't huge, but they're not tiny either. On a poor cellular connection it could take a while for a smartphone to load the page.

Here's a few tips for images that everyone can use:

These tips can help you better design for arbitrary devices and constraints, but maybe that's not enough. In that case, consider these solutions:

The Tip of the Iceberg

We'll be talking a lot about building responsive sites in the coming weeks as we build up to some fun things we're cooking up to release. Images are just one piece of the puzzle, but once you start thinking about how to use them (and the other elements we'll be discussing) we think you'll really dig designing without pixels.