We're only a few days into 2013, and we've already come across a fair share of bold prediction posts under various verticals.

One post, in particular, caught our attention. The post forecasts 10 predictions for the mobile industry in the coming year.

Here's the point and partial quote from the article by Forbes writer Parmy Olson: 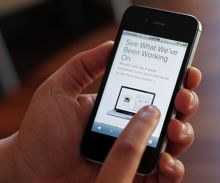 1. HTML5 will make a comeback, helping to make smartphones cheaper.

... "But HTML5 will make a comeback because of the release of Firefox and Tizen." [says Tomer Kagan, chief executive officer of Quixey, a search engine for mobile apps] These are open-sourced, mobile operating systems that Mozilla and Samsung, respectively, are expected to launch in 2013. That could lead to cheaper smartphones, since HTML5 apps can run on these systems with no need for a browser, and they are cheaper for developers to build. "The costs of running a developer community and app store also go away," says [Tomer] Kagan. On top of that, "more users internationally will have access to a greater web than ever before." Essentially, as other mobile operating systems compete against the 90%-markets hare of Android-and-iOS, more developers will push to make apps work across different platforms, using HTML5.

Parmy raises an interesting point in that as more and more open-source, mobile operating systems arise, the more people may be inclined to build responsively with HTML5 to accommodate the growing number of operating systems, as well as the subsequent devices that use them.

It's also important to note that performance is still a major factor when comparing between natively-built and HTML5-built applications. Since native apps (in general) remain faster than their responsive counterparts, it's likely that the transition to full HTML5 app-enabled OSs will take longer than some analysts expect.

One other factor to consider in framing and understanding the HTML5 vs. Native debate is that, in general, it's easier for mobile developers to monetize native apps given the more-controlled ecosystem. HTML5 apps are downloaded entirely to the device, naturally resulting in an unlocked, easy-to-tinker-with state. This can make controlling distribution much more difficult for the app creator.

All bold predictions considered, we're excited about the upcoming year in responsive design. It may not necessarily mean that we'll all be wearing Google Glass next week, but as more devices and operating systems emerge, we're bound to see more designers, developers and entrepreneurs embracing the versatility that responsive design provides. The drop in mobile device cost may just be icing on the cake.