A few days ago I got what might be the best designed app for the iPhone I've seen so far. Believe it or not it's a port of a game now 17 years old.

Back in 1992 iD Software released a pretty revolutionary game called Wolfenstein 3D – the 3D part wouldn't really pass muster today, but for the time it was knock-your-socks-off cool. Wolfenstein was arguably the original first person shooter, grandfather to what must now be thousands and thousands of games. So what's so great about this app on the iPhone? 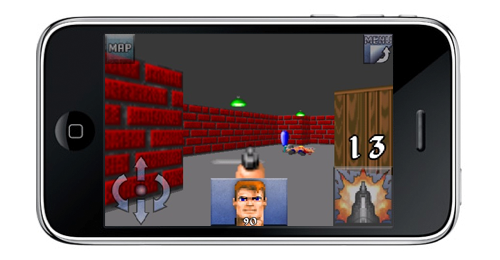 It's not the presentation

These are the original graphics, 2D sprites and horrible sound quality and everything. The game is fun, no doubt about it, but not exactly "current." No, what makes it such a great iPhone app is the consideration that John Carmack (iD Software founder and game programmer savant) put into this port when really, he didn't have to. People would have bought Wolf3D pretty much as-is. Still, Carmack considered the medium and made strategic design decisions that reflected his experience with the platform.

For example, Wolf3D doesn't have an animated loading screen, or three different studio icons in a row, or some other obnoxious load screen. Wolf3D loads to the main menu in under 3 seconds, and you can jump right into the game in another second or two. This by itself is huge and Carmack, in his design notes, mentions that even though in this case it was almost accidental (Wolf3D is very small) it's worth designing for in the future.

Carmack understands how people use the iPhone.

In addition to fast, casual-friendly load times Wolf3D has something else going for it. If a call comes in the user won't have time to get to a save point, or go to the main menu and save. Wolf3D just saves, quickly and automatically, any time the user navigates away from the game. Phone calls, text messages, or just exiting to the home screen with the iPhone's home button all trigger an instant save and quit. Every app for the iPhone should behave exactly like this.

Recently at ZURB we had Luke W from Yahoo! come for ZURBsoapbox – he gave a great talk about outside-in design: design seen from the side of the user, not the designer. iD in this case is a great example of outside-in design (or Design for People, as we like to say). They considered the iPhone platform not just as developers but as users who expect certain behaviors and accommodations from the device.

More than just that they are a great example of effective inside-out design: from the standpoint of developers they understand the technical limitations of the platform and designed to the fullest extent possible. Meshing those two views creates a powerful experience.

Carmack's design notes are full of other great anecdotes about iPhone development and user testing and make a good read for anyone that designs for the iPhone or any platform (including the Web). Carmack and his team really understand the iPhone as a platform and not just as a revenue stream. They managed to take one of the oldest games around and create a refined, pleasant user-experience on a cutting-edge device.

As designers we should always have a thorough understanding of any media we work in to be sure we're applying the same thoughtfulness and consideration that Carmack and co. applied to a 17-year-old game.