In addition to my already obvious love of games I have a peculiar interest in what I like to call "unconventional data display;" showcasing information in ways both strange and awesome. There's so much interesting information in the world and the vast majority of it is presented in lifeless, uninspired ways—but there are some extraordinary exceptions.

This election season has been a goldmine of interesting data display, with news agencies competing with each other to see who can make the most interactive, eye-catching media. The New York Times, in particular, has been leading the charge for the past several years when it comes to telling people what could be really dry information in astonishing ways. Their current electoral map is a great example, as is this post-Katrina map of New Orleans.

But my posts are about what we can learn from game design, not the New York Times (that would be a great topic to explore, though). One particular shade of data display has been gaining a lot of traction in games recently, and I think it's time we as designers really explored its possibilities in our own work. I'm talking about what I'll call organic data display.

No, not that kind. Organic as in "of or pertaining to the basic constitution or structure of a thing"—an example might be my consistent overuse of dashes. The '—' character is such an organic offshoot of the way I think and compose in my head that I can't get away from it in writing. It's an organic flaw. Likewise there is such a thing as organic data display, data which is displayed in a way that the information naturally gives rise to. In games, this tends to translate (but is not always the same) as realism.

For years – in fact for almost as far back as games reach – data has been inorganically displayed. If you're playing a game and your character picks up a rock, placing that rock on an inventory screen and never seeing it again until you chuck it at something is inorganic data display. The concept of the inventory screen has always been a shortcut stand-in for what would be true organic data display: showing the rock in your hand, or in your backpack, once you pick it up. Games are rife with this sort of shortcut. Are you injured? Well, check your handy health bar and see how close to empty it is. I'm pretty sure last time I managed to injure myself I didn't have a health bar in the top left of my vision I could take a look at to see how many points I lost. All I could do is see that I was bruised and think "Yeah, that hurt. Better not do that again."

A recent game that is really exploring the concept of organic data display is EA's absolutely terrifying Dead Space. Dead Space seems an odd choice to demo any sort of realism—you play a far-future engineer battling hideous aliens who have taken over the corpses of the ship's former crew. Just like you see on the news, right? However, when it comes to displaying information organically, Dead Space has taken some huge leaps forward.

The ubiquitous HUD (heads up display) that games are so fond of using as an information catch-all is gone. In its place is information display that fits completely into the world of Dead Space. Carrying equipment? There it is, attached to your suit. Health low? Your suit has an indicator on it displaying its integrity. Don't know where you're going? Your suit can project a map onto the environment around you, or use the ship to display a route on the floor. Need to do something like check the map while something is attacking you? No inorganic full-screen to pause the action: you're dead. 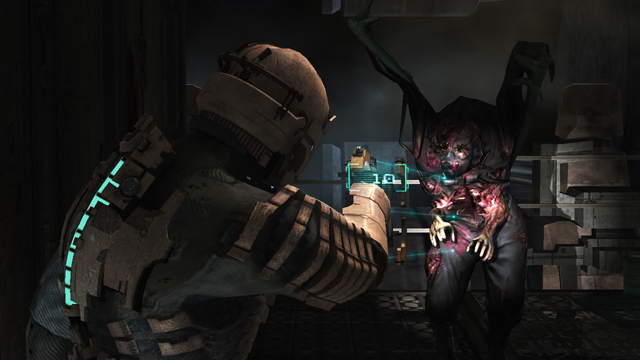 Note the health bar on his back and the ammo counter over the weapon. Try not to note the hideous thing that wants to eat him.

Sure holograms and mechanical suits aren't things we encounter every day (unless after playing you have some really vivid nightmares), but they are things that fit into the world the game presents. Anything the game needs to tell you is presented the way that world would present it; it arises organically from the context.

Why let game designers have all the fun?

Games often present a fully-realized world—working in organic data display there is easier than on a website. Or is it? Granted not everything lends itself to this sort of immersive display when it comes to web design, but I think designers need to start thinking through the metaphors we use, and whether we can take it a step further.

We already routinely talk about "filling a shopping cart," "adding someone to a group," "opening an e-mail." These are actions that have real-world analogues and an organic display model we're used to.

An example of organic display most of us see every day and don't give a second thought is the trash can/recycling bin. Throw something in the trash—there it is, in the trash can. At a glance I know I've thrown things away. Maybe we can do even better and show how full the trash is, to give us an idea of when we need to empty it—just like an actual trash can. Or take an unopened email as an example. If we get physical mail, do we know it's unopened because the text on it is bold? Of course not, we know it's not open because it's still in the envelope. Should we show unopened messages as closed envelopes? Or does that needlessly obfuscate the message content, and slow the user down?