Have you ever seen someone spend 6 hours trying to find a squirrel...in a game? I have. Ever seen someone get excited because they took out their enemy? 10,000 times? Seen that, too. What drives these people to go to such ridiculous lengths? Are they just really hardcore? Are they wasting time? Maybe, but what often drives this kind of fixated, nigh-obsessive behavior is achievement.

Achievement is, of course, the act of achieving, completing, gaining, or finishing something. There are sometimes rewards for this behavior; like money for achieving a particular career goal. Maybe prestige for achieving an academic goal. What we as designers can learn from games is that the sometimes desperate desire to "achieve" doesn't have to grant much of a reward at all.

Where did this come from?

The bext example to date is World of Warcraft. In the interest of full disclosure: yes, I play WoW, and have for years now. So does my wife. So when I tell you that the desire to achieve can grip you like nothing else — I really know what I'm talking about.

WoW has always been about achievement — getting to that next level, getting that cool new item, getting your group to finish off a boss. However, recently Blizzard has decided to up the ante. In addition to the standard goals of WoW they have added "Achievements." They've taken what is already a fiendishly addictive game and added on a whole new layer — and it's working. I've seen people spend hours going places they would never care about, just to get 10 more points. You can hardly move without seeing someone chasing after a squirrel (there's a squirrel related achievement). It's crazy.

People want to achieve, even when the reward is meaningless. The desire to complete something is powerful. We can use this.

So what can we use?

Achievement is not all about games - it's actually everywhere, in tasks we do every day. Every morning I make a checklist of things to get finished today at ZURB, and as I go through my day I can feel my desire to check things off, to achieve my goal. As designers we tell users what they need to finish and how close they are to being done.

Some web tools are already making excellent use of Achievement in ways eerily similar to how games do. A good example is LinkedIn, where the achievement is to finish your profile. When I got started with LinkedIn I immediately saw that completion bar and thought 'hmm, how can I finish that off?' Consequently I put a lot more time into setting up my LinkedIn account than I might have otherwise, and now I'm pretty invested in the system. I already put in that much time, I may as well use it...right? 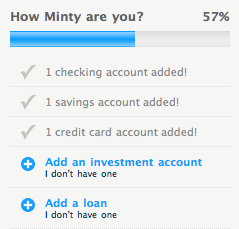 Another good example I've seen just recently is Mint, which now lets you know your 'Mintyness' level. Right there, they got me again - I'm already trying to get that Mintyness up to 100%. I may have been turned off by some Mint features but that incomplete progress bar just...nags at me. I have to finish it.

Achievement is everywhere. Games have turned them into an addictive, numerical science. I wasn't kidding when I said people have burned hours of their time getting these silly, meaningless achievements (myself included). Frequent Xbox gamers know the 'Achivement Complete' sound by heart and will immediately respond when they hear it.

A challenge in design is retention — getting a user to stay, and getting them to come back if they leave. Giving the user a goal to shoot for keeps them there. Games can draw people in like almost nothing else, and we can use that in our own design.