Why You Have to Throw Out Your Work

Or, why we never released Scrumptious, released Strike instead, and are now rebuilding Scrumptious as Resolve.

We released Strike on Monday, and so far we're thrilled with the reception. Some people might be asking "why make a task list web app? Aren't there tons of those?" - this is why.

Some time ago (think years) we started teasing an upcoming app called Scrumptious. A lot of people who love Notable signed up to be notified...and then were never notified.

We did build Scrumptious; in fact built it to such a state that we used it on a daily basis as a helper to our light scrum style at ZURB (morning scrum, task driven). We worked on it frequently, improved it, iterated on it...basically applied our entire app creation process over several months.

Scrumptious had a lot of cool stuff going for it (collaborative tasks, Notable integration, team information and status) but we realized while we worked on and used it that along the way we had stopped building something that solved a problem. Instead, we'd been trying to build what we thought people were asking for - not an app that helped them work better, or design better. So we stopped development, and stopped using it.

Back to Basics with Strike

Rather than just starting over with Scrumptious (or worse, hacking at it until we had something to release) we took a step back and asked: what are the core moments in a task list app?

So we started work on Strike, a simple app that would nail these two simple interactions. We wanted to be sure that we could create an app that would set us up for a replacement to Scrumptious, but also create a viable, fun product for people to use. We even created constraints for ourselves - it had to work without creating an account, and users had to be able to collaborate without accounts. 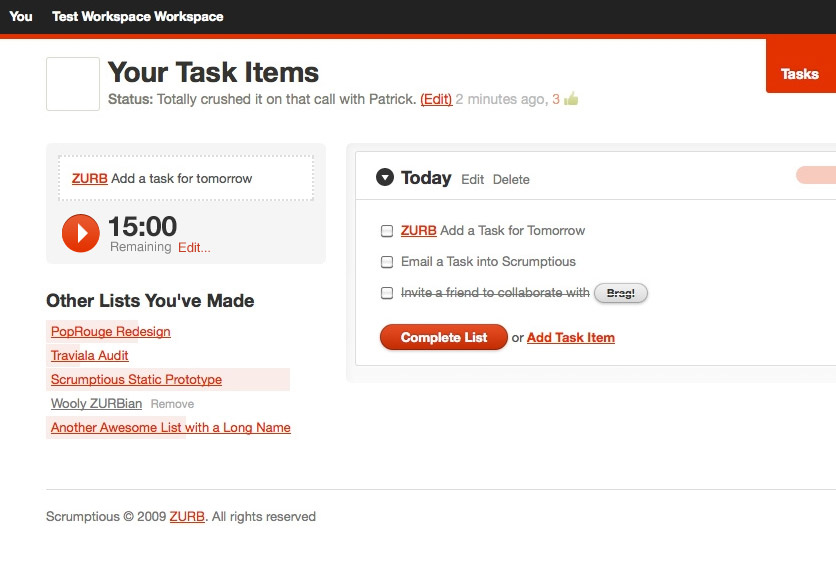 We prototyped a lot of Scrumptious features - things like timeboxing, seen here.

We learned a lot, building Scrumptious and then Strike. With Scrumptious we learned what features we need, and what we don't. With Strike we learned how to create a fast, slick experience that doesn't overthink its core purpose.

For the coming few months we'll be hard at work finishing "Resolve (with feedback from our Strike users). It's another piece of our Product Design Platform (which already includes Notable and Verify). Here what's Scrumptious and Strike taught us about building apps, and building apps to handle tasks:

Scrumptious was a decent app, but there's no market for "decent" apps. We want our apps to be extraordinary. We focused on extraordinary moments in Strike and we're really stoked about the result. We think you'll be just as stoked about Resolve.