Why Culture Ain't Words on the Wall

This morning, we had a conversation with a friend over coffee about culture and how it can't be something that's established right out of the gate. Which reminded us of something Twilio's CEO and Co-Founder Jeff Lawson said to us at his soapbox last month. He said you can't create a culture and its values. Rather, you have to articulate them.

Jeff's been thinking a lot about culture at Twilio, and so have we at ZURB. Which is why it resonated with us when he said:

A company should be easy to use like a product is.

When a person joins a company, he or she has a certain experience, much like the relationship of a product with a customer. Culture being part of that. What does it stand for? What does it believe in? What are the things that everyone should carry with them? 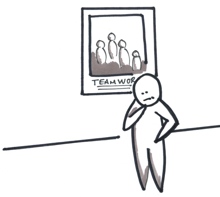 And that's something that can't be imposed by hanging up a few gag-inducing motivational posters, with words like integrity or perseverance. It has to be grown. It has to evolve over time. You can't just outline succinctly what those beliefs are, those values, at the outset. Or as Jeff put it:

A day will come when you do have to articulate those values, shine a lantern on them. Or else, as Jeff said, you risk losing them for all time. Leaders will have to draft out the dreadful mission statement, put a stake in the ground, for the company. Verbalize what the company is going to stand for, especially as it grows.

As Twilio has grown from a handful of people to more than 100, they've tried to put the spotlight on their culture, articulate what they stand for. And they've avoided the term "core values," because it tends to make people barf, Jeff told us. They call it the Nine Things.

Of course, it took some effort to spell out those Nine Things. A few years back they listed five values, but Jeff realized that there was an interesting disconnect when he went to a workshop on culture.

Then a fellow CEO challenged him, asking if they called a Twilio employee up, would that person be able to list them.

So Jeff called somebody. And she said, easy, simple — oops, she wasn't describing the people. She was describing the product. So, at the time, those values hadn't really be ingrained into the daily lives. They hadn't been properly articulated. They weren't real.

Twilio phrased their Nine Things not as haughty concepts, but relatable words. For instance, they say "no shenanigans" instead of integrity, because everyone can imagine what that means. Everyone gets it. Integrity is nebulous. It's a corporate word on the wall that doesn't mean anything really when you come down to it.

Culture has to be part of the daily routine. It's not a serious of buzzwords. It has to be real. It has to evolve and grow with the company. It can't be something that you stranglehold on the first day. It comes from the group of people that you've assembled like a superhero team or a gallant crew of space adventurers. They make culture reality. Because if it's not real, then culture ain't worth the paper those motivational wall posters are printed on.