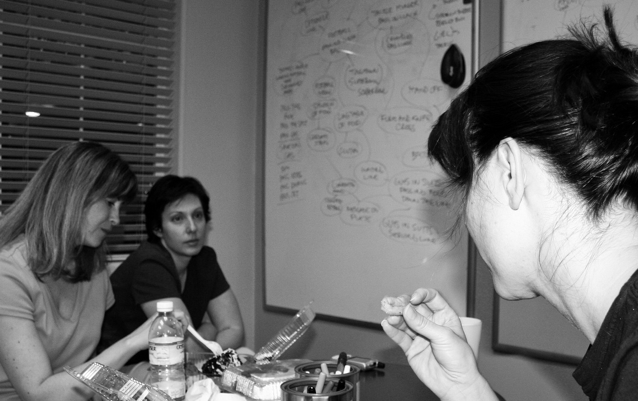 Critics have been slamming brainstorming almost as long as it's been around. They say it doesn't work. That working in solitude generates more ideas than a brainstorm. The problem, however, isn't whether brainstorming works or not. The real problem is that about 90% of the people we come across who say they are brainstorming aren't really brainstorming at all.

When it comes to solid proof that brainstorming doesn't work, critics point to a 1958 study that found that college students came up with twice as many ideas working alone than when they brainstormed together in groups. One problem with this study, however, is that it didn't actually test the techniques of brainstorming.

When the techniques are properly used, brainstorming can be an effective design method. However, most of the people we see that brainstorm don't do it right, using brainstorming to get consensus rather than generate ideas.

We've found that brainstorming works better in small groups, no more than five people. A facilitator is necessary to keep people in line and make sure everyone follows the rules. The techniques for a good brainstorm are:

Constraints, such as the ones above, reduce uncertainty and stress, allowing teams to be more creative and generate more ideas. But, like with everything else, practice makes perfect when it comes to brainstorming. For example, brainstorming works exceptionally well for designers at IDEO because it's a skill that they learn and hone through deliberate practice, according to a 1996 study from Administrative Science Quarterly. Or as the study puts it:

Designers believe that brainstorming skills take time to learn, that facilitation and participation are distinct skills, and that such skills vary even among experienced engineers.

Brainstorm Sparingly Through The Design Process

Space is crucial to the brainstorming process, as suggested by this recent Co-Design article. Around the offices at ZURB, we have several comfortable rooms where we can stand around huge whiteboards and hash out our ideas.

We even knocked down the walls that separated the design side from the support side. We don't have pesky cubicles to separate us either. We've found that open space encourages collaboration. Without physical blocks, creativity can be unlocked.

If used properly as a design method, brainstorming can breed creativity. Others will see things that you might not have considered. Having a sounding board, even another person to talk things through, helps spark ideas and let's you see things that you can't because you're too close to your work.