Who's Your Early Adopter?

Browsing Quora recently, a question on product design caught my eye: "What are the key differences between 'Normals' (normal mainstream users) and tech early adopters?'

It's a common concern of people working on new products — most of you have probably seen variations on this graphic:

By definition, early adopters make up only a small percentage of the typical-user base of a successful product. New products and services tend to live or die based on their ability to cross over into a mainstream audience (see Geoffrey Moore's classic "Crossing the Chasm").

Most Quora answers focused on early adopters' tech savviness and comfort using social apps and other technologies, but that's only part of the story. There are actually two types of early adopters: I like to call them "Tire Kickers" and "People With Their Hair on Fire." Spotting the difference between these groups is key to identifying the right kind of feedback and putting together the best roadmap for you product. 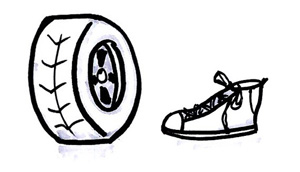 Tire Kickers have a general interest in the field and like to play with new technologies, but most of the time won't convert to long-term users because they don't have a need for it. These are your tech bloggers who try a product then post about it. They like to be first, and tend to be very vocal with their opinions — but they may not always be the best source of feedback, because they have so little in common with mainstream users or people trying to solve a specific problem.

However, don't dismiss Tire Kickers out of hand. They can be valuable allies when it comes to a blog post or word-of-mouth. However, they're not likely to become long-term users of the products they try because their attention span casts a wide net.

In other words, they'll kick the tires, check out the interior, maybe take a car out for a test drive and tell their friends how cool it is, but, in the end, they don't buy the car.

People With Their Hair on Fire: Your Superfans

When it comes to early adopters, People With Their Hair on Fire (PWTHOF) are the ones to focus on. These are the people who use your technology because you're solving a pressing problem for them, regardless of whether they typically fall into the role of early adopter or not. These are the ones who will tell you how your product fits into their daily lives, how they use it to solve problems, what they love, and what they hate. 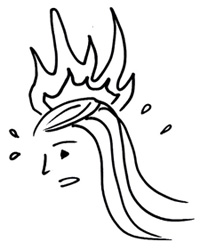 Create a dialogue with them and be responsive. Because your product solves a problem for them, these users tend to be forgiving of bugs or usability oddities. They'll often be willing to help test out new features and give honest feedback.

Why are these people important? Well, PWTHOFs and mainstream users are just two sides of the same coin — users who are typically mainstream that might become early adopters when a product fulfills a real need for them. This means two things: 1) they'll be more typical when it comes to comfort with technology and ability to learn new features, and 2) they're likely to know other people with similar characteristics. Both of these factors are invaluable when it comes to designing for your users.

So if the PWTHOFs are key to your product's future, and Tire Kickers will fall by the wayside, how do you identify which is which?

Well, there's no substitute for talking to people. Respond to users on Twitter, reach out via email, have conversations on the phone. Once you're talking one-on-one, it'll be easy to see who's been diving deeply into features and who's just giving surface feedback.

Win over those PWTHOFs, and not only will you have a fan for life, but you'll be well on your way to winning the hearts and minds of mainstream users.