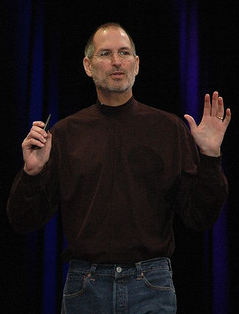 In the following few excerpts from the book, Kemper describes the discussions that took place during the meeting. There are few interesting takeaways here about how Jobs works during meetings:

If you want me to leave, I will, but I can't just sit here!

Mike Ferry, Brian Toohey and Tim Adams had each put together PowerPoint presentations about the product. Tim called these presos "another dog and pony show." It's interesting to see how the typical "we pitch, you sit quietly and ask questions after," did not fly with Jobs:

"Good morning to everyone," said Tim, smiling at the front of the table. "Before we start, we'd like to ask you to hold your questions until after each presentation."

"Otherwise we might as well not be here," said Jobs.

"How long is your presentation?" asked Doerr. "Each pitch is about ten minutes."

It's worth noting that most of us can relate to Jobs' reasoning here; we all want to interact and participate in a conversation, not just sit back as someone pitches something.

There were notes scribbled on the palm of his hand

It's clear that Jobs fully invests himself into the meetings he attends. He thinks through the point of the meeting and the outcome of the conversation, and loves to use past product successes and failures as examples. When the conversation shifted toward the introduction of two Segway models to the market, Jobs used the iMac as an example:

Tim studied Jobs for a moment, then turned to the screen and put up a spec sheet about Metro and Pro. "As you can see'" began Tim.

'Because I see a big problem here,' said Jobs. 'I was thinking about it all night. I couldn't sleep after Dean came over.' There were notes scribbled on the palm of his hand. He explained his experience with the iMac, how there were four models now but he had launched with just one color to give his designers, salespeople, and the public an absolute focus. He had waited seven months to introduce the other models.

What do you think about Segway's design? I think it sucks!

As we all know, Jobs is quite frank when it comes to voicing his opinion. It's a pleasure to hear him refer back to his three design mantras as he explains why he believes the Segway's design simply sucks:

'What does everyone think about the design?' asked Doerr, switching subjects'

'I think it sucks!' said Jobs.

His vehemence made Tim pause. 'Why?' he asked, a bit stiffly.

'In what sense?' said Tim, getting his feet back under him. 'Give me a clue.'

'Its shape is not innovative, it's not elegant, it doesn't feel anthropomorphic,' said Jobs, ticking off three of his design mantras.

'You have this incredibly innovative machine but it looks very traditional.' The last word delivered like a stab''There are design firms out there that could come up with things we've never thought of,' Jobs continued, 'things that would make you shit in your pants.'

I understand the appeal of a slow burn, but personally I'm a big-bang guy.

We all know that Jobs is a risk taker. As the conversation shifted to the strategy of introducing Segway to the market, Jobs disagreed with Bezos. In the passage below, you can see Jobs' belief that a small (less risky) launch in foreign country will bring more bad than good:

Bezos suggested starting slow, using one city or country as an experimental station. The perfect place to begin, thought Bezos, was Singapore. "You only have to convince one guy, the philosopher king, and then you have four million people to test it."

But Jobs was still shaking his head at Bezos's suggestion. Because of the Internet, he said, slow was no longer possible. People would learn about Ginger in a flash of bits and bytes, and would want one now. So a small launch in a foreign place was foolish, because if the machine was unavailable in the United States, the company would blow its chance for $100 million of free publicity in its biggest market.

"If you show this to Hennessy," Jobs said to Doerr, referring to John L. Hennessy, president of Stanford University and a world-class engineer, "he'll shit in his pants." Evidently Hennessy did that more readily than Jobs did. "And if you offer to give him a hundred of them if he'll run a safety study and a usage study, that's a done deal in ten minutes," continued Jobs. "You do that at ten colleges and maybe at Disney, so people can see them but not buy them."

"I understand the appeal of a slow burn," he concluded, "but personally I'm a big-bang guy." For the first time that day he smiled. "The risk with a fast burn," he continued, "is that it exposes you to your enemies. You're going to need a lot of money to fight thieves."

Thanks to Steve Kemper for posting a detailed excerpt from his book on the Harvard Business School Blog. You can check out and buy the entire book on Amazon.