What No One Seems to Mention About Google+ 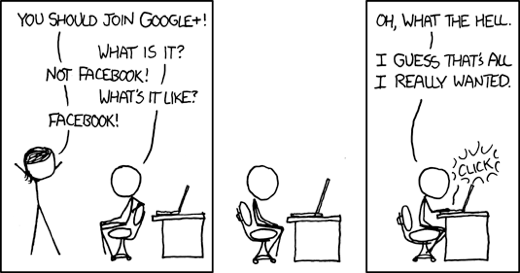 If you're active online at all, you probably heard that yesterday Google released Google+, a 'project' which includes several new services: Circles, Sparks, and Hangouts (as well as some ancillary pieces). There have been hundreds of articles written already about the release, but Mashable has a good one. If you don't know anything about Google+, go read that. We'll just chill here.

All done? Awesome. Plenty of interesting features, some decent differentiators from Facebook (and some notable lack of differentiation). Seems like everyone's talking about this is a 'Facebook killer' (or not), based on its features, how it handles photos, how it handles groups and privacy. What's weird is that no one is mentioning why Google+ has a tremendous advantage over Facebook.

Google is activating 500,000 Android devices every day. Half a million devices based on Google's platform, getting started every single day. That's a lot, a lot of devices. And every one of those is a potential Google+ user.

Consider Apple. For years now Apple has reaped the rewards of building 'the whole widget' - hardware and software made to work with each other. Google is in a similar position, able to deeply integrate Google+ into their OS. They've barely scratched the surface, but the clues are there - Android devices can do an instant upload to Google+ for photo sharing.

All by itself, Google could make Circles the de facto social network for hundreds of thousands of users, depending on how hard they press on it. We can't forget though that Apple got screwed by Facebook on the release of Ping, and they clearly haven't forgiven them. Apple integrated Twitter into iOS5, a partnership that only makes sense in the light of sticking it to Facebook.

Imagine a network similar to Facebook, with considerable mobile adoption and a long pedigree of successful services, with open data and a strong commitment to privacy. Throw in that this network actually has an Apple pedigree of its own and integration of Circles into iOS starts to make pretty good sense.

Facebook is still the 700-million-pound gorilla in the room, but they're vulnerable. Rumors of Project Spartan only reinforce that Facebook knows mobile is where they're weak, and they need to get out and establish themselves as an indispensable platform themselves, rather than just a service.

If both Google and Apple were building deep integration of Google+ (mostly Circles) into Android and iOS that's practically a coup d'etat, and while Apple fiddles around with Ping, they're not stupid — they know building their own social network is not their strong suit. Whoever wins on mobile devices will win this in the long run, and it looks like Google has learned from their mistakes (much stronger privacy; usable, considered design).

It's not even possible to switch over to Google+ from Facebook right now, but what do you think? Ready for a challenger to Facebook, even if it's from Google?