Watching a Movie with your Facebook Friends (Or Not)

Wish you could watch a movie with your Facebook friends? You'll have to wait a while. Warner Bros.' toe in the water on Facebook "showcasing The Dark Knight for $3 in Facebook credits" is a mediocre experience.

Let's start by saying that if Facebook got serious about movies, Netflix would have a reason to be worried. Not because Facebook has any strength in that field, but simply because they have an overwhelmingly large audience, and the money and talent to get it done.

There's been a lot of coverage recently about Warner Bros. "partnering with Facebook" and about Facebook "getting into the movie business." Neither of those statements are true; the Dark Knight experiment (that's what this is) is a Facebook app like any other, and if Facebook had a hand in it at all, it was simply to greenlight the app. 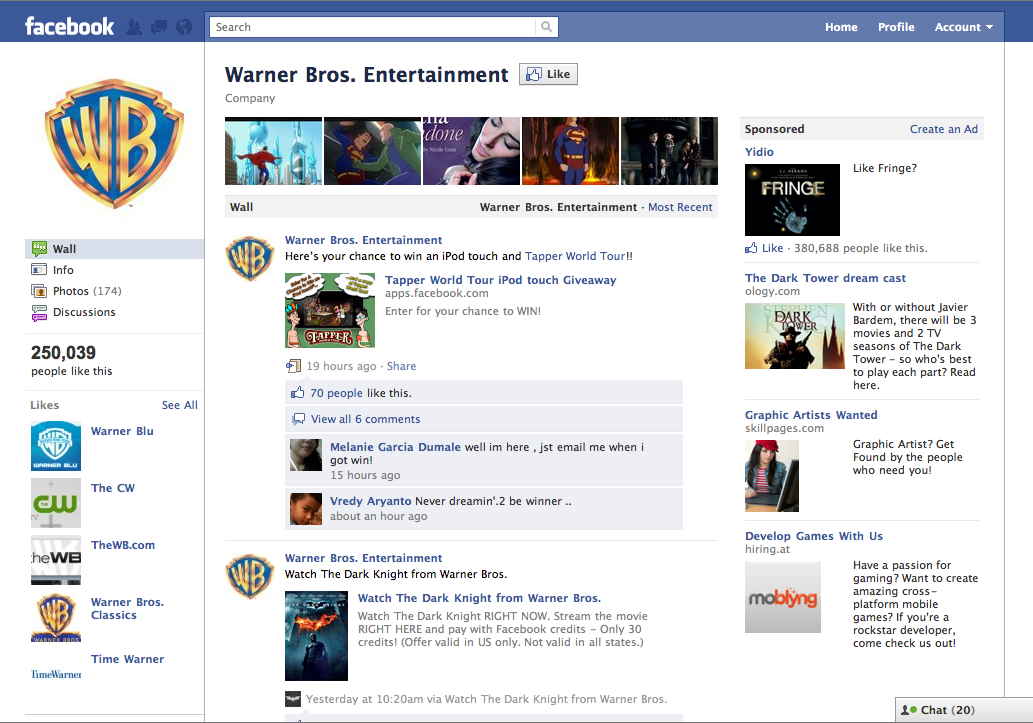 The WB Fan page isn't a great place to look for this movie.

From a cold start and having only heard about it, getting going was more difficult than you'd expect. A Facebook search for Warner Bros. returns many results, for many divisions. Searching for The Dark Knight gets you closer, leading you to the movie's fan page which has a wall post for the streaming movie.

This is Warner Bros.' first challenge: Facebook is not a great discovery experience, and isn't supposed to be. Facebook exposes to you what your friends are into, and what they share, not what's globally interesting or relevant. For discovery, the best move here is actually Facebook ads. By taking advantage of Facebook's powerful ad targeting Warner could simply ensure that anyone who likes The Dark Knight sees an ad for the streaming video. 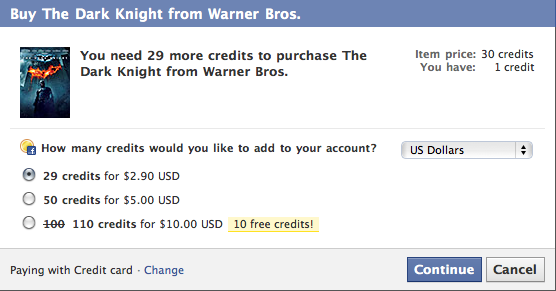 Once you manage to find the app you have to pay credits to watch. Don't expect to see it in your feed. Only about 70 people have 'liked' the app, and 70 out of 500 million means the odds one of those 70 was your friend are pretty small. Let's say this: Facebook's credits system is slick and easy to use, almost dangerously so. Giving up my info to get credits was easy, and Facebook scores extra points for allowing you to buy exactly as many as you need. This is in stark contrast to many point or coin based system where forcing you to buy too many is part of the play, they keep the float and profit from wasted credits. Kudos, Facebook.

Watching the movie is...well, exactly like watching a video on almost any site on the internet. It has play/pause controls, you can skip ahead by clicking the scrub bar, and you can go fullscreen. There's really not much more to say about watching the video. The quality was about on par with most standard quality online video, not HD by any means, but it looked alright in fullscreen on my MBP. 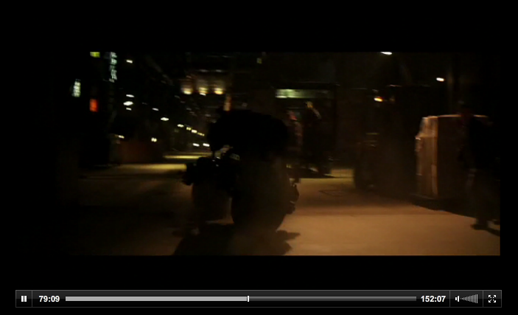 It's tough to grab a great screencap of the Batpod.

The missed opportunity for Warner Bros. in this case is really everything around the video. While they did include the usual share on Twitter (irony!), share on Facebook and Like buttons, there's very little else done to warrant integration with Facebook. No watching with friends, no renting the movie for a friend (non-transferable) or gifting the movie, no discussion, no related content, basically none of what makes Facebook a powerful experience.

How Does It Stack Up?

Let's compare this to another way of watching movies online: Netflix Watch Instantly. At peak times, over 20% of all internet traffic is Watch Instantly so it's safe to say that Netflix is onto something. Their viewing experience is far from perfect, but it's pretty good. Here's the difference:

We could go on and on. There's really no comparison, nor should there be. This is a toe in the water from Warner Bros. to see if there's viability in monetizing their movies through Facebook. There might be, and this might almost be the minimum viable product that gets them rolling, but right now the experience just isn't there. 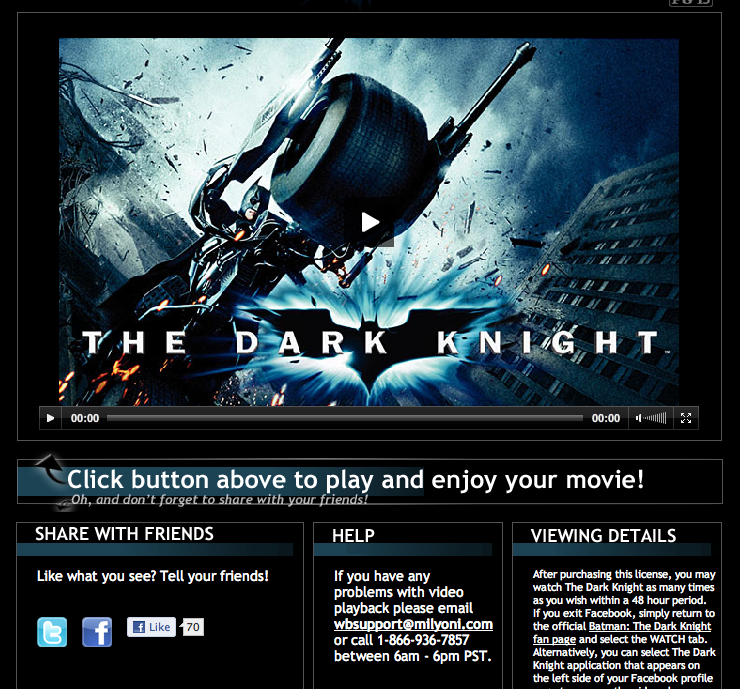 The experience on Facebook is just...not great. This is what you see after you've purchased the movie. At least they tell you how to play it.

Look to see more toes in the water here on Facebook and in other places. Movie studios are desperate to eke out whatever money they can from a rapidly changing and, on their part, ill-understood market. It would be shocking to see Facebook push toward movies, as they've traditionally strayed away from monetization through media partnerships, but who knows? Tell us what you think (especially if you watched The Dark Knight on Facebook) in the comments.