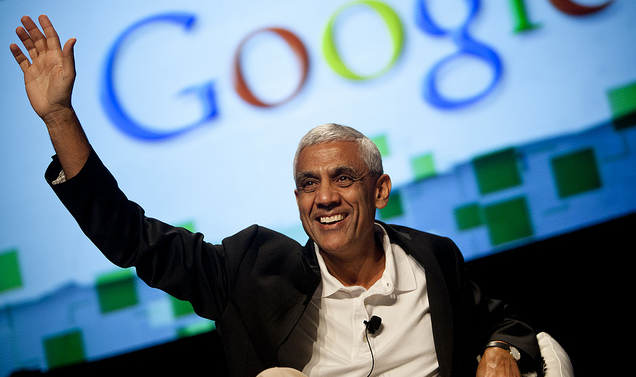 As most of you know, we're big fans of the 5 second memory test: show a screenshot to someone for 5 seconds, then ask what they remember. We even created an app, called Clue, to help people upload a screenshot and test how memorable their own webpages, graphic designs, or photos are. The idea is that if nothing grabbed you in that first 5 seconds you probably would have left the website or the design and never looked back. It's fun to hear how one of the most influential people in business uses the 5 second rule.

If for some reason you're not familiar with the name Vinod Khosla, his one line bio would mention that he is one of the most influential people in business today. During his 25 tenure as a venture capitalist he has helped grow hundreds of companies, including Sun, AMD, Excite and Juniper. Khosla uses the 5 second rule on the initial pitches from entrepreneurs and on pitches their companies give to prospective customers after he invests in them. Here is how a recent Forbes article described Khosla's use of the 5 second test:

For each of them, he applies his five-second rule: he puts a slide on a screen, removes it after five seconds, and then asks the viewer to describe the slide. A dense slide fails the test'and fails to provide the basic function of any visual: to aid the presentation.

By applying his simple rule, Mr. Khosla is addressing two of the most important elements in presentation graphics: Less is More, a plea all too often sounded by helpless audiences to hapless presenters; and more important, the human perception factor. Whenever an image appears on any screen, the eyes of every member of every audience reflexively move to the screen to process the new image. The denser the image, the more processing the audiences need. At that very moment, they stop listening to the presenter. Nevertheless, most presenters continue speaking, further compounding the processing task. As a result, the audience shuts down. Game over.

It's absolutely great to see investors applying this test. Giving people 5 seconds to digest a slide or a webpage only affords them just enough time to absorb the most powerful parts of the images and text they're seeing. That's the way you have to think when you're designing your slides or web pages. You only have 5 seconds to grab your audience's attention, whether you're pitching VCs or trying to convert your website visitors.

Hat tip to Dre from Wages of Wins for sharing this story with us.