Hello! As the new guy here at ZURB I've taken my sweet time getting into the blog, but that's over with now. Here we go.

I'm fascinated by video games, always have been. It began as a fascination with games like the original Wizardry through the Lucasarts adventure games (Full Throttle, anyone?) past the first simulations (Flight Sim to X-Wing) and all the way down this meandering, ever complicating path to the photo-realistic technical marvels we can play today. What started as 'wow, a computer can really DO that?' has now morphed into 'wow, people can actually MAKE this?' The complexity and genius of a modern video game is, I worry, completely lost on most of the people playing them - but not me.

From a design perspective (this is a blog from designers, after all) what has always caught me is that video games represent an almost completely blank canvas: there are no rules to follow, no conventions required, no preconceived notions of what is good or bad. You're not even really restricted by the input - a modern computer/console can support almost any sort of input the human body can produce (and quite a few it can't). This is why in the field of game design you can find such a stunning variety of design decisions governing input, interaction, interface, data display, and story telling.

The web, unlike the blank canvas of a game, is still a restrictive canvas, riddled with preconceived ideas and paradigms as well as serious technical hurdles. So what can we learn from games that we can really apply to our own design?

We can learn about immersion.

There are more lessons to be sure, and I'll come to them in some other posts - right now though, we'll talk about immersion. Immersion is the idea that a game presents an experience so fluid, so natural, so engrossing that you forget you're playing a game and instead feel like you're living something. Take EVE Online for a (bad) example. 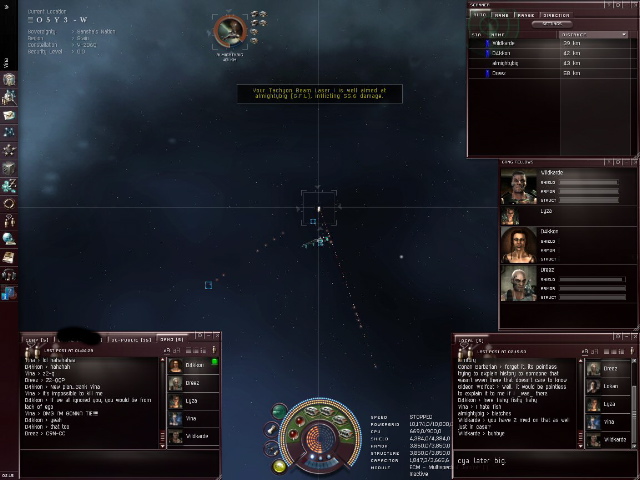 There's a gorgeous space sim in there somewhere.

EVE Online is an MMO, designed for several thousand people to play together at once. You pilot a spaceship around the universe, choosing your own path and making your own decisions. Maybe I want to be a trader, running a flotilla of cargo ships from system to system, amassing riches and prestige. Maybe I want to be a ruthless pirate, gunning down unsuspecting travelers and taking their goods as my own. The possibilities, I must grant, are almost endless. On paper this sounds perfect to me - a tool to help me imagine whatever I want. Why then have I picked it up and almost immediately dropped it? Twice?

Because it is not immersive. EVE is, as one commentator eloquently put it, is "the most beautiful spreadsheet I've ever seen." The interface is so obtuse, so complex and the actions so unintuitive that I don't feel like I'm living some other make-believe life - I feel like I'm working a system, like I'm managing some horribly complex window into something very pretty, but very much divorced from who I am and what I'm doing. 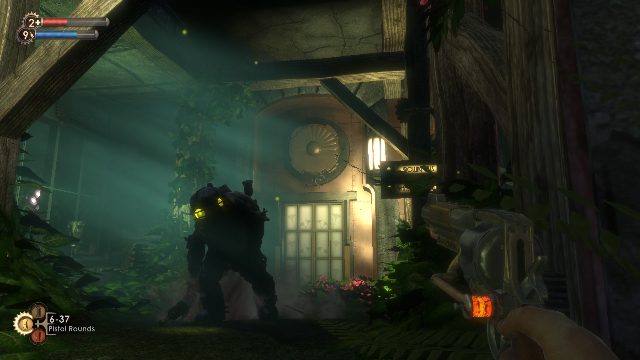 If that thing comes after me, I'm turning off the TV.

Now let's look at something very immersive, in this case 2K's masterpiece BioShock. BioShock is, on the surface, a first-person shooter, kin to probably 10,000 other games dating all the way back to Doom and Quake. What turned BioShock from a very pretty but very generic FPS into a gripping, sometimes terrifying adventure was immersion. The interface of BioShock is very natural; there is only the barest essentials of screen clutter to give you some sort of status and they can (almost) be forgiven that. When I play BioShock I don't feel like I'm playing a game, where I need to point at something and push a button to shoot it - I feel like I am that character, really moving through this incredible, decaying underwater metropolis. When events unfold around me I don't see it from some sort of floating, invisible camera - I see it as me, through my eyes, even if my eyes at the time are blurry, or bloodshot, or in total darkness. When I need to 'recharge' I don't just see some status bar increase - I see myself injecting power right into my arm, right on the screen.

BioShock breaks this from time to time - there is still metadata on screen for things like health and ammo which I think they could have eliminated as well, and the hacking minigame completely breaks the mold but these things are small and mostly forgivable. I'll give them credit for everything they did right, and they did do many things right. For the first few hours I played BioShock I could only do it in small doses - I would get too tense and stressed out to keep playing.

So What Can We Take Away?


Most design is not game design - you can get away with a lot of risky choices in games that you can't in print, or online. Or can you? That's the theme of these posts (I'm getting ahead of myself, but this just paints me into a corner and forces me to write more): let's see what we can get away with, areas we can explore further and more openly than maybe we thought.

Immersion is critical, especially as media becomes more complex. When I played Wizardry with my Dad on our old Mac SE I was immersed - but there's no way that would hold up today. The media-centric culture of today needs more; more depth, more story...more immersion. We as designers need to provide that in any media. Maybe that means doing a better job at really telling a story - even if that story is as simple as "here's you creating a photo album online." Maybe that means exploring the full range of input, and display - clicking a button or a link isn't always the best way to say you've done something.

Maybe the biggest thing is that to immerse we need to just get out of the way - don't let someone think about the interface they're using to do something and just think about doing something. The tools are already here for almost any media we can care to name - we just need to better explore how to use them.