Update: The winner who managed to solve the puzzle the fastest was Mr. Andres Alvarez (Dre) of Colorado! Amazing effort put in from everyone! It was a close race.

ZURB recently put together a four person team to participate in a one day puzzle hunt hosted by Shinteki. We had such a good time that we were inspired to create our own mini puzzle. There is a puzzle hidden in this blog post, be the first person to tweet the answer with the tag #zurb and we'll make you an honorary member of the ZURB puzzle team by mailing you your very own ZURB Aquarius remix T-shirt.

If you've never heard of these puzzle events, and you enjoy puzzles, you should most definitely take a gander at Shinteki. You and your team travel from location to location solving all manner of puzzles, with the goal of acquiring clues that will lead you to the next location. We like to do a little bit of team building, but wanted to get away from our daily routine of trust falls, bare-knuckle cage fighting, and pie battles. Besides, cramming into a car and spending the day solving puzzles seemed like a nice way to spend a Saturday.

The event we participated in was called the Aquarius Remix, started at 10am in Palo Alto, and suggested we bring swim suits. Which was a little confusing since this was supposed to be a puzzle day and not a swim meet. In addition to swim wear we also brought the following: 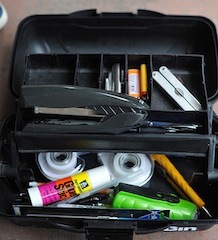 Toolbox with some of the supplies we brought. The scissors and tape were critical to success.

Anthony and Chris get wet
The event kicked off its water theme with a sponge relay in less-than-comfortable degree weather. After we were sufficiently wet and cold, we were handed a packet with our first set of clues and set loose. The event had a rather clever system for validating your answers to puzzles and giving hints if you got stuck. Each team was given a palm pilot (welcome to 2004) with a custom application to kept track of your clues and solve time for each puzzle.

Without giving away too many spoilers from the event, the puzzles consisted of everything from more traditional word searches, anagrams, trivia, and geography, to the less conventional message in a bottle, unidentified vials of liquid, snowball in a fountain, and a night hike through Golden Gate park (we were glad to have brought the flashlights).

Most of the puzzles involved multiple steps (like dealing with grief), identifying some sort of unique twist (), and using standard encoding (braille, ASCII, semaphore, etc.) or word descrambling (anagram, letter deletion/selection). We had done a fair amount of studying puzzles from past events, and would have been in a lot of trouble had we not.

Drives between clue sites were -30 minutes long, sometimes through areas of limited data service, so GPS was super helpful. The event started in Palo alto, went out to the ocean through some very scenic drives, and then .

Overall we had an awesome time, and while the event was not officially scored, we reckon we scored somewhere in the bottom percent. Which we think was pretty damn good given it was our first event. The only puzzle we failed to complete was the last one, which can only be described as the crossword puzzle from hell.