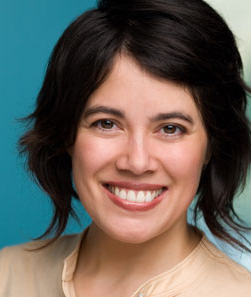 Millions of people use Flickr everyday but so few know how the product itself was born and evolved since then. We were interested to hear about some of the early product wins and loses when Flickr was still just a social game. In the following interview with Founder of Flickr Caterina Fake we discuss some of the thinking which took place early on as the site was conceived.

You were a successful entrepreneur from early age of 4. Tell us about your very very very first business.

My parents told me that I would have to earn a living and that I should practice by starting my own business. So I started selling my crayon drawings to my parents and my grandmother. My drawings from that era say 10 cents, 25 cents in the corner. It was a captive customer base, but the problem with the business was I was operating in a fairly small market. The market was also quickly depleted, and expanding the product line into toilet-paper-roll art and popsicle stick crafts had disappointing returns.

Wasn't Flickr an accidental success after you ran out of cash trying to build a social game? Could you elaborate?

"Accidental success" isn't really a term I'd use. You should undertake every endeavor intending for it to be a success, by whatever metric you are defining success. You could be trying to build a moderate mom-and-pop business that allows you to spend more time with your ailing aunt, and that would be a success, or you could be trying to become rich beyond your wildest dreams of avarice. Flickr was, by many metrics, a runaway success, and perhaps an unexpected success, but we were working hard to build something good that people loved, and as such it was not accidental.

Flickr v1.0 was an IM client with an ability to drag and drop photos into it. At the time there was Shutterfly, Snapfish, oFoto who dominated the web. How did you compete with these sites when you decided to turn Flickr into a photo sharing site?

Honestly, had we given those sites any thought, we wouldn't have built Flickr, because they were already huge and successful, and demonstrated that photo-sharing was a loss leader for getting ppl to buy printing services. We didn't compete with them at all. In fact, we were blissfully unaware of them and had only the vaguest idea of how they worked as we were building Flickr.

What were the key features in Flickr which differentiated your service from these others sites?

The old sites were modeled on pre-digital paradigms, whereas we'd come from blogging, social networking and understood things differently. The very complete open API was tremendous, as well as tagging, the ability (and encouragement) to post photos on other sites, the per-photo permissions...there were a lot.

You believe that in order to achieve a good viable idea you have to find an interesting problem and iterate over and over by testing the idea out with your friends and colleagues. Describe how this process helped with creating Flickr? What was this process like at Flickr?

Well you described the process very well already. It's also easy if you build something that you use yourself and love to use.