The Big Windows 8 Compromise That Nobody Is Talking About 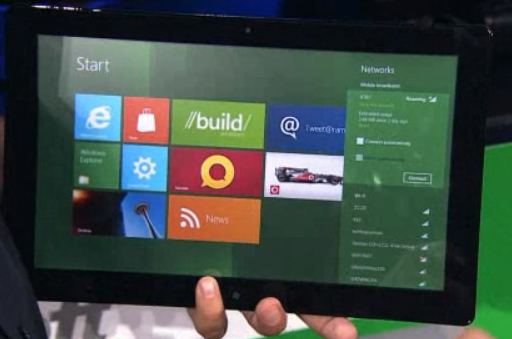 Windows is one giant beast that Microsoft has been tied to for over 20 years. The unsuccessful Tablet PC which was built on Windows has been out for 10 years. Noticing the enormous success of the iPad, Steve Ballmer decided to give the good old Tablet PC another try and really work hard this time at making the Tablet successful with the next release of Windows.

Microsoft's Steven Sinovsky recently published an article on the thinking behind the design of Windows 8, stating that they took a "no compromise" approach. There are a few parts of the article that caught our attention:

From the start, our approach has been to reimagine Windows, and to be open to revisiting even the most basic elements of the user model, the platform and APIs, and the architectures we support. Our goal was a no compromise design.

Why not just start over from scratch? Why not just remove all of the desktop features and only ship the Metro experience? Why not 'convert' everything to Metro? The arguments for a 'clean slate' are well known, both for and against. We chose to take the approach of building a design without compromise.

Windows 8 brings together all the power and flexibility you have in your PC today with the ability to immerse yourself in a Metro style experience. You don't have to compromise! You carry one device that does everything you want and need.

Our design goal was clear: no compromises.

Who Is Really Compromising Here? 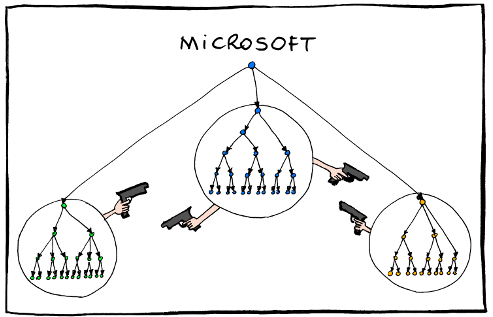 Emmanuel Cornet has an amazing set of cartoon org charts of Apple, Facebook, Amazon, Microsoft and a few other companies. Notice how Microsoft is portrayed on the right, each team within the company pushing for their own product to be in the spotlight and pointing guns at the other teams. The Desktop team is of course given more importance usually since the desktop version of Windows dominates the sales for the company.

In order to make the PC Tablet successful this time around Balmer put in place a powerful team of designers and engineers. PC Tablet team got as much importance this time around as the Desktop team. iPad popularity put a lot of pressure on the Tablet team to create some pretty slick software. They went to work and produced some great results. The time came to ship the new Tablet software, here is how we imagine the conversion unfolded between the Tablet and Desktop teams:

Tablet team: "Our software rocks, it's the best there is out there. We have to put it on all PCs as well."

Desktop team: "You're crazy, we have hundreds of millions of legacy users, we can't take away the desktop version of Windows! We can't take it away! Ok, ok, we'll compromise, let's put both versions of the software on all PCs. People will be able to switch to the desktop version of Windows 8 if they want to. We'll have everything on PCs! No compromise for the user. Sound good?"

That's exactly what happened. Every new PC running Windows 8 starts up with a Tablet version of Windows now. The user can switch back to the regular view after they'd like. Watch the video below to see how this works:


So the all powerful Desktop team compromised with the Tablet team to make the Tablet PC successful this time around and create a PC which runs two separate versions of Windows (tablet and desktop). They decided to market the new Windows 8 as a "no compromise for the user" - in other words a PC with all the features possible in there for you! Woot! Awesome! Right?

Nobody Needs Two Different Versions of Windows On PCs

The wow moment of the iPad is not that it can replace the MacBook, but the fact that it opened the door to all sorts of things that the MacBook is not good for. After all — who uses all devices the same exact way? Do I drag items with my fingers on my laptop usually? No. Do I pinch to zoom on my PC usually? No. Do I use my iPad or Tablet to develop Android apps or work on Excel sheets? No. All these devices are meant for different use cases. Each one is designed to help us accomplish specific tasks.

People don't care about the quantity of features in a product. What they really want is usable products. Products that solve problems for them. Windows 8 is trying to be everything for everyone on all the devices and that sounds like one hot mess:

As we showed, you get an amazing touch experience, and also one that works with mouse, trackpad, and keyboard. And if you want to stay permanently immersed in that Metro world, you will never see the desktop ' we won't even load it (literally the code will not be loaded) unless you explicitly choose to go there! This is Windows reimagined.