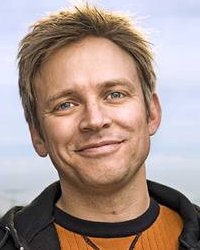 "Second Life was simply unfundable!" said Philip Rosedale, the man who dreamed up this virtual world 11 years ago. Which leads us to ask how the heck he turned this virtual world idea into a $100 million dollar business with 300,000+ people on the site at any given time?

Second Life is a virtual world where anything you can imagine exists. There is an economy and currency exchange, real-estate which people buy and sell, replicas of landmarks such as Rockefeller Center, all sorts of animals such as horses, elephants, there's sex, marriage, friendship, sadism, spiritual retreats, conferences and anything else you can imagine. All of this is created by people who live in Second Life. Linden Lab, the company which created Second Life, acts as a government keeping affairs in order. Linden Lab makes money by selling property to people and pays it's own dues for the CPU resources the land requires.

On Friday, March 18th, at 12 noon, Philip Rosedale, founder of Linden Lab, will get on his soapbox to share lessons he learned from difficulties in building a product. Here's a taste of the questions he'll delve into during the Q&A:


A bit about Philip: He started his first company selling database systems at 17 which helped pay for his college education. After college, in 1995, he created a video conferencing product called FreeVue which was acquired by RealNetworks where he became the CTO. In 1999 Philip founded Linden Lab and created SecondLife, fulfilling his lifelong dream of a creating an internet scale virtual world. Despite four years of continuous struggle to get users and raise funding from investors and almost closing it's doors, SecondLife has turned into a $100 million dollar business with 300,000+ people on the site at any given time.