It's a bird! It's a plane! It's another new ZURBian! We'd like to extend a big ZURB welcome to Chris Michel, our newest designer.

Chris just moved from Clovis to good 'ol Santa Cruz, where he lives with his wife and makes the drive over the hill everyday to come to ZURB HQ in Campbell. He's already learned to love highway 17 and was 2 hours late on his second day due to an epic cabbage-truck accident (which we of course hassled him for mercilessly).

He brings a hard-working and simultaneously laid-back attitude to the ZURB mix and is hoping ZURB will open his horizons as a designer and give him a sense of being part of something bigger. 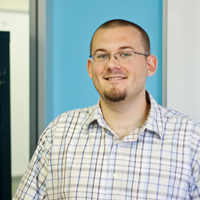 We welcomed him to the team with a client kick-off call on his first day, which he admitted to being his most stressful moment this week, but he's taking it in stride.

"My favorite part about ZURB so far is the openness of the office. Everyone is so willing and helpful. I've also really enjoyed the energy that pours out of each person and into the work."

Yeah, that's pretty much what we like about it, too. Welcome to the team, Chris.