Got a Big Problem? Focus on Something Small. 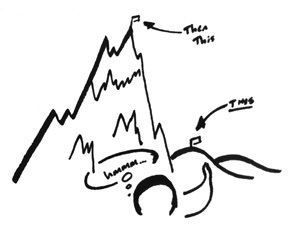 At ZURB we tend to tackle big problems, both for clients and for our products like Notable and Verify. When you're up against a big problem it's easy to get stuck — you'll overthink the problem, spend days or weeks worrying about it and sketching out solution after solution. Sketching is great, but at the end of the day we've found it's better to get something done. That means focusing on something small.

Getting Unstuck on Verify

Here's a recent example: we relaunched Notable a little over a month ago, a major release with an all-new interface, dramatically improved interactions and flows, and an overhauled visual style. We are, as you can probably tell, pretty stoked about it. What this means now though is that our other app, Verify, has fallen behind with older, less refined patterns of design and interaction. Our first thought was 'well, we've got to get Verify on the same level as Notable' and that's a big problem - lots to rewrite and redesign, tons of code to migrate, prune, and expand. We got a little stuck, trying out several ways to get started and evaluating a few different options for how we could do it. Some of it was productive, but not enough, so we stepped back and decided to start small. In the next few weeks we'll be releasing some really cool features for Verify - features customers have been clamoring for and that will solve some real problems for them. It's not a ground-up redesign to match Notable, but the momentum we build both for customers, and for our team, will help us tackle that with more energy and momentum when the time comes. And in the meantime we'll be growing our user base with things like new test types, PDF test export, and another awesome (top secret) feature.

Build Up to Big Problems

We could have spent the next few months tackling the Verify transition, and in that time we'd be frustrated and stressed while our customers got nothing of value. Instead, we're energized, better prepared, and our customers are going to reap the rewards. Don't let yourself or your team get stuck on big problems - they need to be solved, but you'll solve them just as fast by starting small and working up to it, plus you'll get cool stuff done in the interim.