Foursquare announced today that they've brought the "Nearby Friends" feature back to the "Friends" view on their iOS and Blackberry apps. Surprisingly, Android users have not received the app update yet (though Foursquare promises it's coming soon).

If you're a longtime user of the popular geolocation app, it's a feature that you've probably missed. Back in June, the app pushed a major update that focused more on social interaction (liking and commenting on updates) and recommendations on things to do — found through Foursquare Explore, which took a front-and-center approach (literally) in the new app design. The Verify tests we ran all pointed toward a fantastic redesign, but one of our readers pointed out that this feature was missing.

The feature identifies which of your friends are closest to your current location — and while it may not seem like that big of a change on the surface, it's a welcome feature for those who have a large network on the platform. Given Foursquare's increased focus on local recommendations, the initial omission of this feature was somewhat baffling.

On iOS, in order to switch between "All Activity" and "Nearby Friends," a user needs to swipe downward on the "Friends" tab. But be careful — a full swipe results in a refresh of the feed and does not let the user select between the two choices. 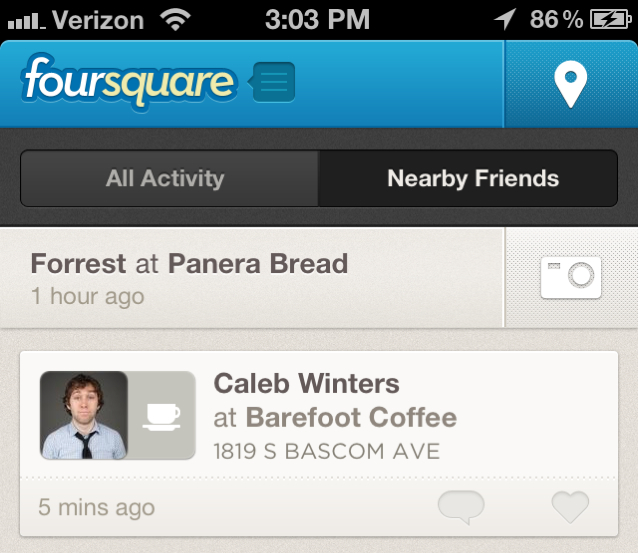 This newest update to one of the most popular geolocation apps is a key example of how one small feature inclusion (or omission, in this case) can have a significant impact on a user's sentiment. Though the app was well-designed (the NYT's Jenna Wortham included it in the Path, Instagram and Wander class), some users simply didn't overlook the feature's absence despite the sleek new look. While some social networks have traditionally been adverse to caving to user feedback (Facebook's redesigns over the years), it's refreshing to see a major application like Foursquare make a change for the benefit of all users.

What do you think about Foursquare bringing back the "Nearby Friends" feature to their app?