"A good reporter gets the news — and gets it first!" once exclaimed mild-mannered reporter Clark Kent. "He lives by the deadline!" A news outlet, whether print, television or internet, can't miss a deadline. If they do, they don't get the scoop. News is 24/7, especially on the Web, and the Washington Post knows that. The paper can't waste time coding new sites from scratch. They need to prototype quickly and push things live ... like yesterday.

The Post has been using Foundation to hit deadlines. This week they launched a new site using our responsive framework — PostTV, an online channel of various news shows. This isn't the first time the paper's used Foundation. They prototyped an interactive live news feed using our grid. 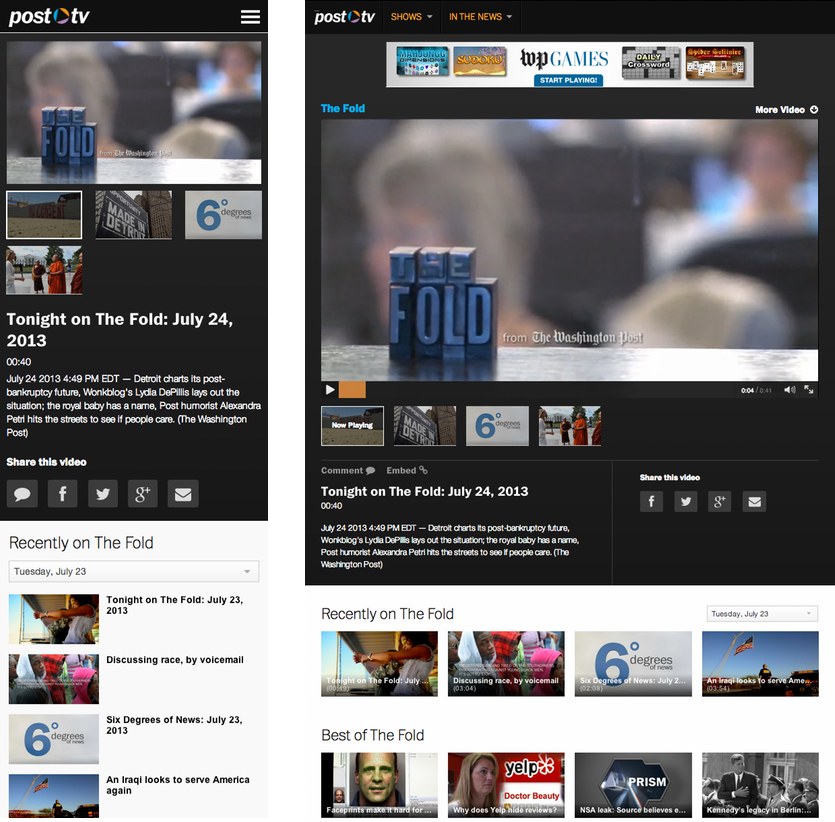 Mobile and desktop views of PostTV.

We chatted with Mobile Design Director Joey Marburger, who said the paper previously used Bootstrap to prototype. But the design team found that they could prototype even faster with Foundation because our framework was barebones enough that they didn't have to overwrite a lot of styling. Now they're using Foundation to crush deadlines. As Joey put it:

We would be missing deadlines if it weren't for Foundation.

When it comes to building sites fast, the Post employes the ZURB Design Process. Before typing code, they do sketches then create mockups before moving on to prototyping, which has become a crucial step in their work.

Joey had been following ZURB for years and learned our design process through reading our blog. In the days before the Post adopted our process, designers at the Post would get caught up in the "how do we do this?" phase, said Joey. Now they start playing around with Foundation to see how their ideas would or could work. And that comes in handy in a time crunch. As Joey said:

We are always constantly doing stuff and moving really fast from breaking news event to a long-term product or project, no matter the time scale.

Joey started at the Post three years ago. Back in those days, the paper had to code everything from scratch, even the basic stuff like column structure. Joey said the live stuff back then was in disarray. More than a year ago, he knew that they needed something to help them out. At first, they used Bootstrap as their go-to prototyping tool.

Switching from Bootstrap to Foundation

However, the Post didn't need everything that came with Bootstrap, such as its JavaScript plugins. What they could really do without was all of the extra CSS that made every site built on the framework resemble every other Bootstrap site, said Joey. They didn't need the fancy gradients or the shadowing or any of the other styling that was cooked in it.

When Foundation 4 came out, the Post started ditching Bootstrap everywhere, said Joey. The Grid, their live news site, was a custom theme originally based on Bootstrap, but they moved it over to Foundation during the prototype phase.

Foundation has been an important tool in the Post's never-ending battle to meet deadline. As Joey put it:

With Foundation as a starting point, we wouldn't be moving as fast as we have been.

And that's deadly important in a deadline-driven profession. The Post's design team is able to whip up a prototype in 15 minutes, which is impressive to Joey's managing editor. Joey said his editor is always fascinated by the amount of work they're able to produce without getting burnt out or stressed out.

He added that Foundation cuts out the drudgery, such as not having to start from scratch each time they build a site. They can get just start building a product, even if the idea is a little raw. It has also sped things up on the product side. Now they have a better idea of what they need and don't need from Foundation so they aren't loading code that won't be used.

The framework has also taught their front-end developers to write better code. Developers can work on shared code much more easily because they can look at the HTML they inherit and know confidently that it'll work. And since they build atop the Foundation core CSS rather than overwrite it, they've been able to build better development standards for both prototyping and building products. As Joey said:

Novice developers have been able to harness it and build pretty awesome products.

The Washington Post has now embarked on a redesign of its main site. They're still in the prototyping phase and, of course, they're using Foundation to help them out.