Digital Comics Not Responsive ... Yet 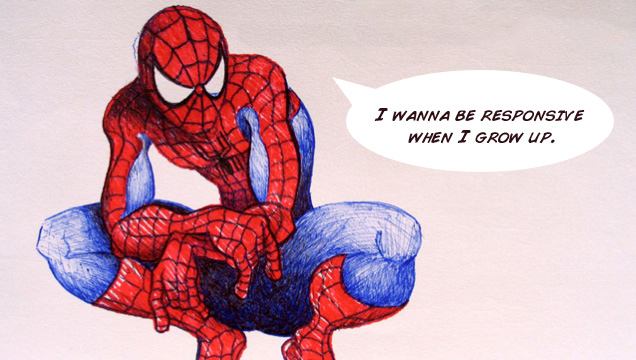 Last night, as Jonathan and I were coming back from his talk on designing rapidly for multiple devices at the Silicon Valley HTML5 meet-up, we started talking about comics. When I got out of the car, I kicked myself for not asking Jonathan about the future of comics in an era of thousands of mobile devices. Then, today, I see one of the comic publishing juggernauts, Marvel, is launching a line of comics solely targeted for smartphones and tablets.

Are Comics Thinking About Designing Across All Devices, At Last?

Not really. Marvel is focused solely on dedicated apps for those devices, such as iOS and Android, rather than thinking holistically. What the company is actually planning is the perfect illustration of a digital shortsightedness, reacting to the here and now, ignoring the different phones, tablets, and other web-enabled devices yet to come.

While we think it's great that Marvel is thinking about smartphones and tablets, we think it may be painting itself in the corner. Sure, Marvel's plans will push the storytelling envelope, giving us nifty movie-like zooms and maybe even becoming more interactive than just the swipe of a finger to change the page or panel. However, Marvel could be alienating every reader on devices their dedicated apps don't support.

There's a glimmer of hope that comics might yet think responsively with apps such as Comixology. According to this interview, comic creators at Marvel are considering the different tablet sizes, establishing some basic guidelines for the variety of screen sizes.

Still, the major comic brands are segmenting themselves, remaining device specific rather than thinking of their products as being responsive, fluid enough to fit a whole breadth of screens. Designing interactive comics that work perfectly well on the web as well as on the mobile allows comic companies to create content that would support everyone, not just the specific devices they target now.

Truth be told, comics have always been a bit behind the curve by a decade when it comes to the digital space, going in kicking and screaming. And they're still behind the curve, not plunging fully into responsive web design. But, at least, they are finally thinking digitally. But it's a good reminder that, as product designers, we can't find ourselves stuck in specific devices or let ourselves fall behind the responsive curve.