Failure is part of life but nobody really brags about it. Nobody writes a book called "Ten Easy Steps To Fail" or "How to Go Bankrupt." Everybody wants to be a success and every new company building a product sets out to solve a big problem, make tons of money and grow forever. You won't hear a CEO of a recently funded company say: "I have the plan for failure." It's always a plan for success.

We are thinking of this all wrong, the important thing is failure! 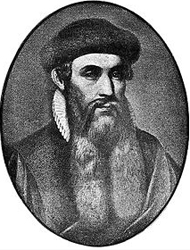 That's the quote from Tim Hartford, the economist who recently published a book called Adapt: Why Success Always Starts With Failure. Hartford provides many examples of the importance of failure in the book, one of them goes back to 500 years ago. The Gutenberg Bible, Hartford says, was a failure. It's a pretty strange example of failure since it was the first book printed with movable type which started 500 years of mass communication. What we do now is pretty much the result of Gutenberg bible.

Believe it or not, the Gutenberg Bible was a total flop for Johannes Gutenberg, the father of the printing press. He went bankrupt trying to make money printing this book. Just like with any new technology, it was very expensive to print books (similar to the current Nissan Leaf cars). It was actually so expensive that you might as well hand write them rather then print them. The business model which eventually worked out a bit after Gutenberg's time was printing leaflets for the church. These early leaflets for the church kept the early printing industry afloat.

Many folks think that because Johannes was brilliant enough to create the printing press in the first place, he must have made a success of it. It doesn't work like that in the real world, says Hartford. Just because he's a great inventor it doesn't mean he is a successful business man (Twitter is a great invention and they are still practicing earning revenue).

Hartford speaks of the Halo effect in business publishing, where we assume if someone gets something right, they get everything right. We tend to discount a long history of failure, which leads to these successes. Most successful businesses have train wrecks behind them. People learn by doing until you finally perfect the idea. There is an excellent interview with Tim Hartford on NPR which outlines a bunch more examples where the initial failure led to success.