How a Flexible Process Helped Us

On the first day of ZURBmas, a ZURBian gave to me … an hour-glass with cards. OK, we won't bore you with our caroling. But it's pretty amazing to see our annual gifts get into the hands of our customers and friends who've supported us over the years. And wouldn't have been able to get them there without the entire team helping and applying a flexible process. And the last part is what got us over humps in the project.

A collection of photos taken by our friends and customers.

This year's gift was based on Friday 15, which are creative challenges that our entire team does every Friday afternoon. We started doing these fun exercises a while ago to hone our product design and problem-solving skills. It's become part of our culture and allows members of the team that don't usually work together team up (pun intended). While we had a concept, we needed to approach the problem of creating something special the same way we'd do for any project. Having that process made us get the gifts out the door in a tight (really tight) timeline.

On the 1st Day of ZURBmas, Build a Prototype

We got the idea to make a card set because we spend a lot of time playing card games after work. But would the idea fly? With sharpie and paper in hand, we whipped up a back-of-the-napkin sketch to estimate costs. Having a ballpark cost allows for better-informed decisions and helps manage the iterative process. It allowed us to answer: was the concept technically feasible? Did it meet our goals? How would our customers interact with the card set? 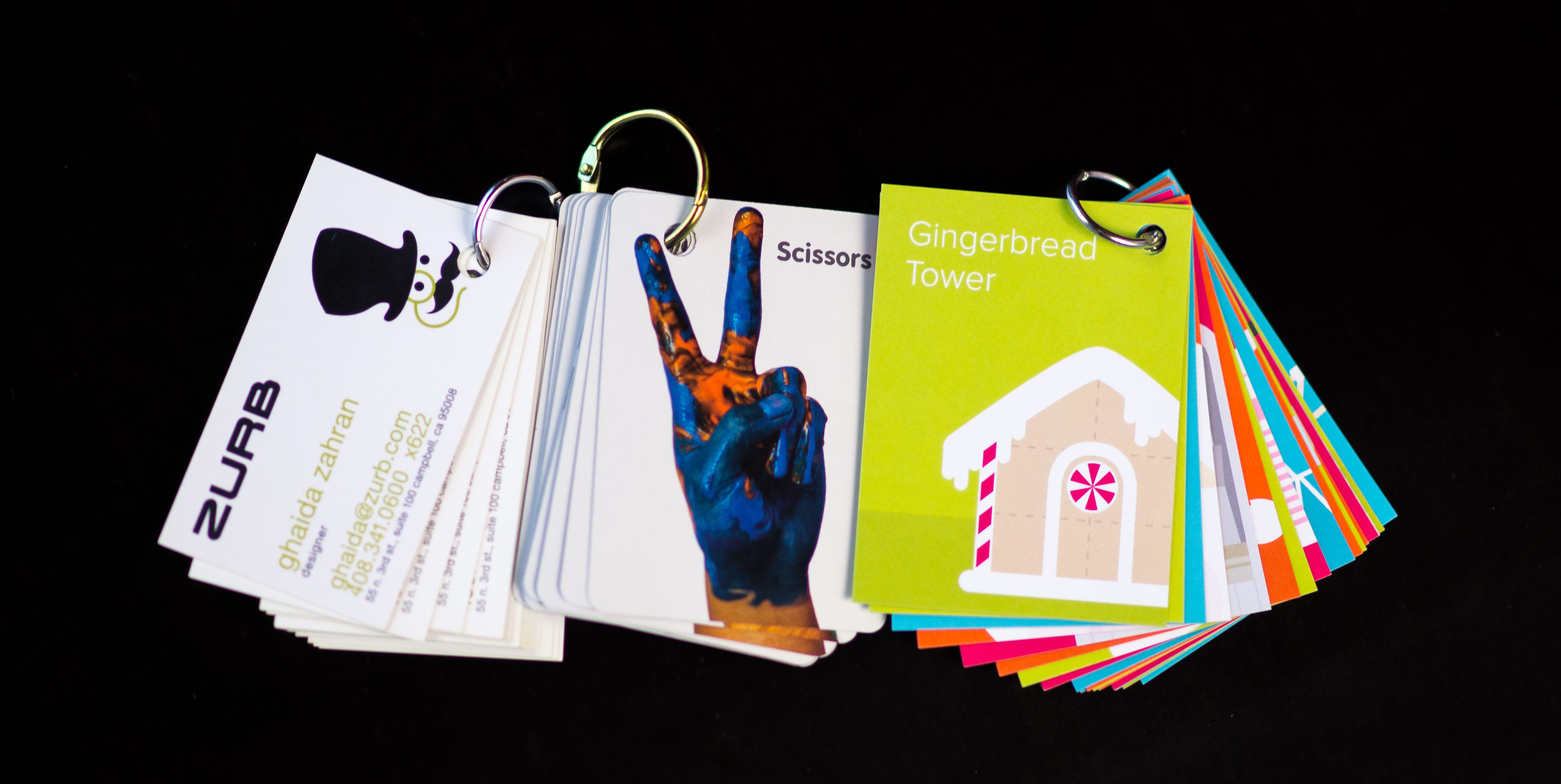 Our card-set prototypes next to the final product.

Prototyping also helped figure out these questions, including what exactly we needed to order, and costs. We constructed two prototypes: 2×3 (playing card size) and 4×6 (a bit bigger than an index card). Having something physical allowed us to investigate different ways of constructing the cards. We got a feel for how the cards felt in someone's hands. The winner: the playing card-size set. The 2×3s fit nicely between the fingers and was much easier to flip through. With that decision made, we could now make other decisions — like the design and who was going to be on our ZURBmas list!

On the 2nd Day of ZURBmas, Get Everyone Invested

Sending out an annual gift takes an entire team. But to get the elves into the workshop, they have to be invested. Storytelling was key to this. We had to tell the team the story of ZURBmas. They needed to understand the why of sending gifts — the benefits to ZURB, to themselves, and to the customers. And that was important to help the team visualize the end goal — getting the gifts in the hands of our recipients. Or else they might not give a Dickens. (See what we did there?)

We started telling the story of this year's ZURBmas gifts with the leads, then spread out to the rest of the team, like concentric rings when you plunk a pebble in a pond. This also allowed us to get feedback on the concept as well as on the prototype, and the designs for the card set, the greeting card and everything else. With the team onboard, we were able to divide the labor because no one person can do the holiday list, order the materials, create the designs and then box everything up for some 1,000 people. And the more people involved, the more we were able to open up problems.

The timeline for this project was tighter than Santa's suit after he's had a few Christmas cookies. Starting in November, we had to ship everything by Dec. 13. And our sled hit a bump in the frost with our mailing list. We had to open up the problem and having others involved helped get us to a better answer.

For instance, our mailing list. It was collected from various sources: our clients, our close friends and those who signed up for our monthly newsletter. Not everyone was going to get the 15-minute hourglass. We had to decide who was going to get that or get the card set. We enlisted our Connections Team and our accountant to help divvy up the list, and our leads and interns contributed by pruning it of old or out-of-date addresses. Having those folks participate in the list allowed us to explore why only one group would get the hourglass/cards while others would get a card-set and a special holiday ZURB sticker. Our solution: clients, customers and close friends would get the former while everyone else would get the latter.

We took a similar approach when it came to figuring out the vendors for printing the cards. Creating burndown lists the entire team on target. And as the old adage goes, two heads (or many, in this case) are better than one when it comes to solving problems.

But that wasn't the only problem we opened up. We explored what else we could do to make ZURBmas special, especially for those who weren't getting the hourglass and those not on our holiday list. After exploring different concepts, we came up with the idea of creating an interactive game related to the "Gingerbread Tower" Friday 15 challenge.

Sketch of the gingerbread site. 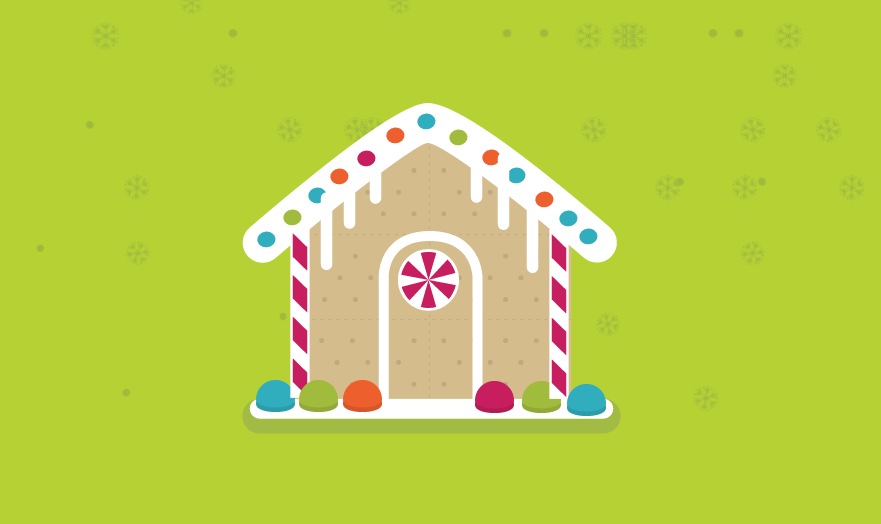 A gingerbread house created on the site.

This game was another way to get other people on the team invested — this time our engineers. They were able to create the site in JavaScript. But it was tricky. Our engineers used Parse, which helps integrate an interface with your data, but can't handle relational queries. However, they found a workaround to get the site working. They also used touchpunch.js to for the drag-and-drop feature. Try it out for yourself, then share your creation!

'Twas the Night Before ZURBmas …

… And all through the house the ZURBians were packing. Having solved the project's problems, the entire team spent the last few days before our shipping deadline stuffing boxes and envelopes or filling out customs shipping forms. That's because they were invested. Like we said, they got the story of ZURBmas and wanted to be part of it. And they were all excited to see people tweet out pictures of the gifts they got. And we wouldn't have been able to sell that story or get the gifts in their hands without a flexible process. It allowed us to load up the sleigh, hitch up the reindeer and deliver the gifts to all our good friends and customers.

And with that, we want to wish a Happy Holidays!