The ZURB team would like to welcome the newest ZURBian, Connor Sears, who is two days into his first week with us. 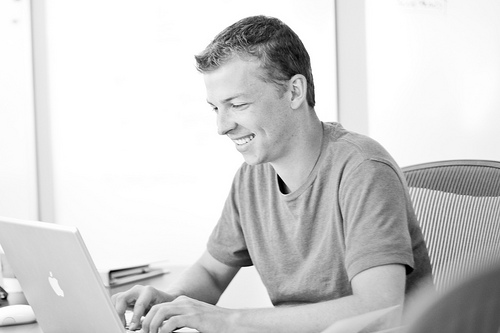 Connor Sears, ZURB's new guy, gets down to business. He's sporting a comfy t-shirt with a MBP laptop and hails from the great state of Kentucky.

Connor is an interaction designer from Bowling Green, Kentucky where he was born and raised —and where he acquired his proper Southern accent, unlike Jonathan whose lack of accent was an extreme dissapointment considering he spent several years in the South.

He earned his B.S. in Telecommunications from the University of Kentucky, during which he worked at two design firms and did a stint as a freelancer before seeking out ZURB and our team of interaction designers.

I'm really looking forward to working with people who are at the top of their game and who have a unique outlook on the industry as a whole.

Connor also possesses the appropriate level of nerdy-ness to compliment the ZURB team nicely. Among his nerd credentials are an excitement for new type faces, a love of Apple products, a need to "look under the hood" of every website he visits and his claim that he made the Kessel run in less than 12 parsecs.

He's only been in California for a couple of days, but as soon as he starts sightseeing, what he'd really like to see is the house from "Full House," but he'll settle for the Golden Gate Bridge.